The Database of General Geographical Objects (BDOO) is a vector (object) database which contains the spatial location of most important topographic features along with a basic description of their properties. The content and detail level of the BDOO database corresponds to a general geographic map at the scale of 1:250,000, whereas its scope covers information on:

At the moment, BDOO contains ca. 600,000 objects and features, and the cartographic image of this database is used, among others, at www.geoportal.gov.pl as a base map for scales under 1:50,000 (Fig. 1). 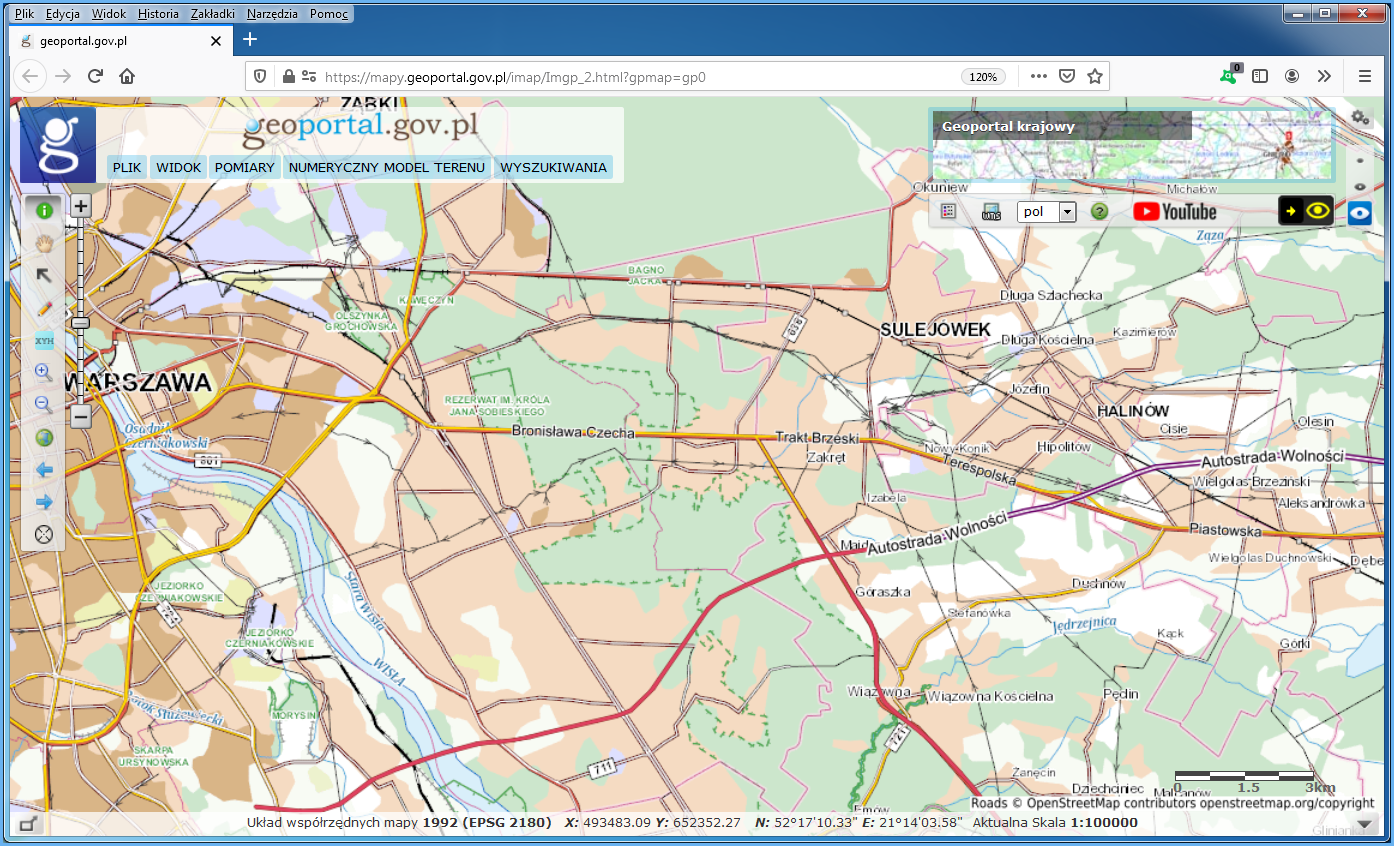 The detailed scope of information collected in BDOO, as well as the arrangement, procedure, and technical standards to create, update, verify and share this data is governed by the Regulation of the Minister of Development, Labour and Technology of 27 July 2021 on the topographic objects database and the database of general geographical objects, as well as standard cartographic studies.

The Database of General Geographical Objects has been created for the entire territory of the country as a result of a quantitative and qualitative generalization of the Topographic Objects Database – BDOT10k.

Free QGIS software is a great tool for BDOO data visualization and analysis. Due to the broad range of topics covered by BDOO data, it is best to use the BDOO_GML plug-in provided by the Head Office of Geodesy and Cartography (GUGiK) for the import and presentation of this data. It provides a representative image of a downloaded BDOO collection similar to a traditional geographical map, as illustrated in Fig. 2. 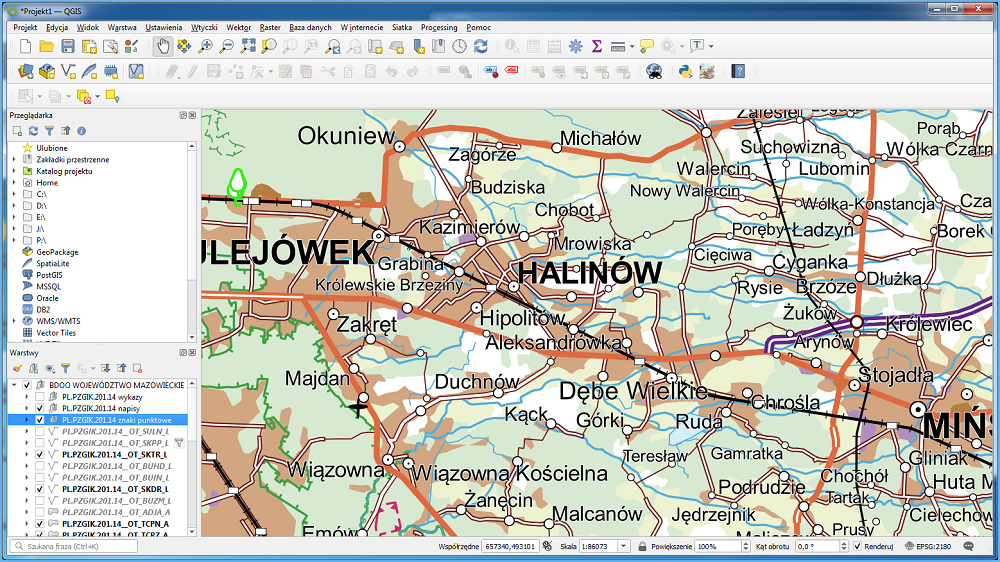 BDOO data can be presented along with other shared data or services, e.g. with a Digital Elevation Model image shared in the form of shading at https://mapy.geoportal.gov.pl/wss/service/PZGIK/NMT/GRID1/WMTS/ShadedRelief, to expand data visualization and analysis functionalities (Fig. 3). 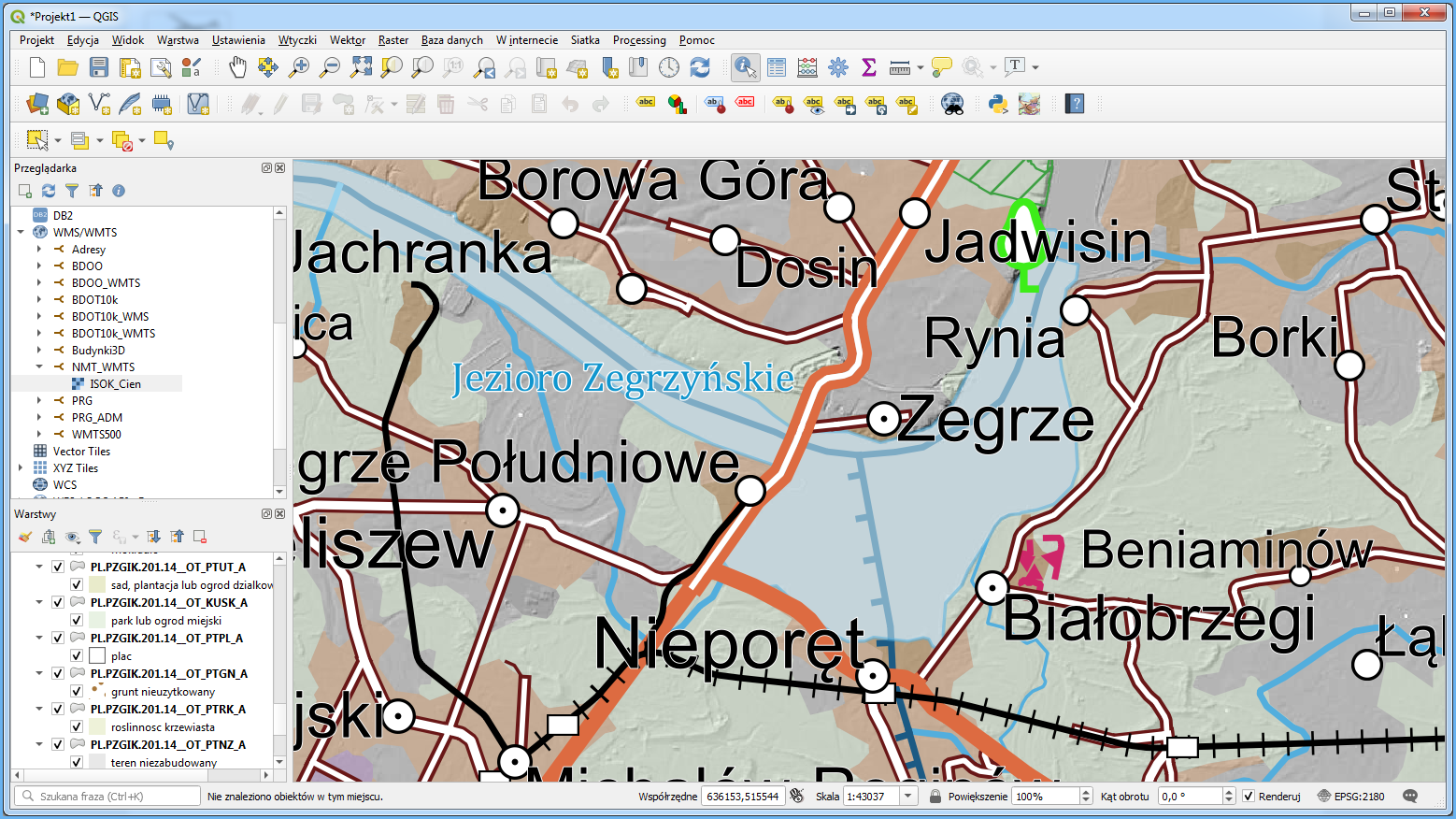 BDOO data can be browsed using WMTS which is by default connected to www.geoportal.gov.pl. The service can also be connected to any software that supports such standard (WMTS URL: https://mapy.geoportal.gov.pl/wss/service/PZGIK/BDOO/WMTS/2021). The results obtained by connecting the service in QGIS are shown in Fig. 4. 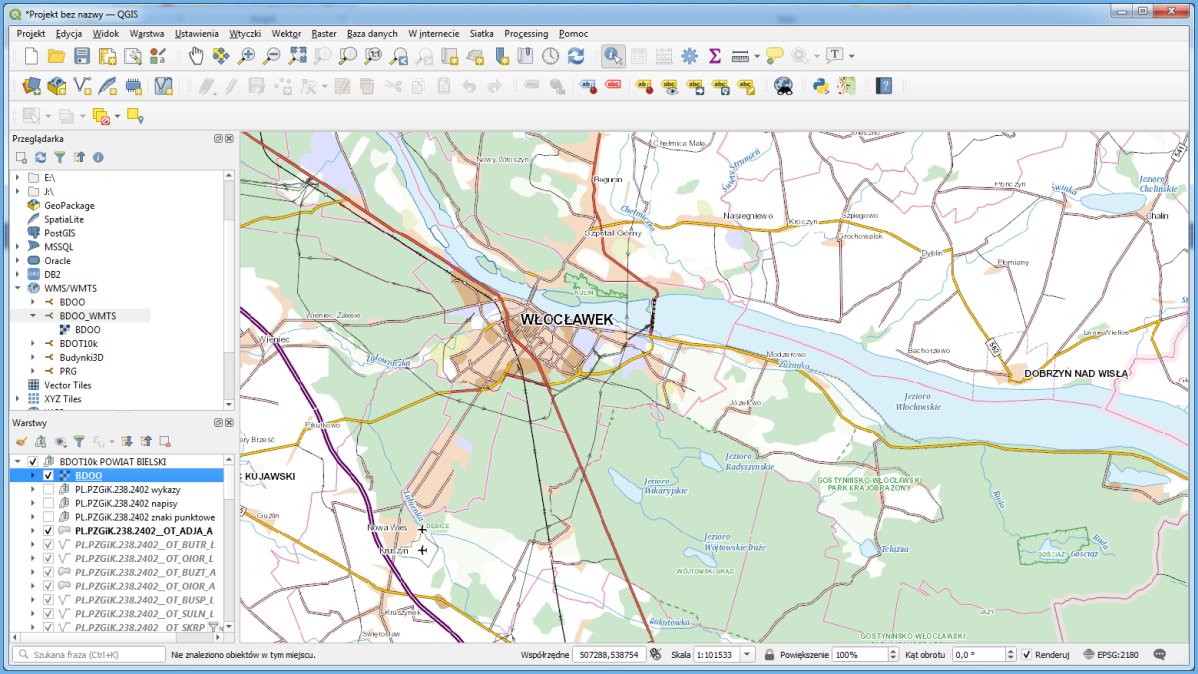 Connected service should display BDOO data at scales under 50,000, whereas for larger scales no data will be displayed because there are no tiles generated for them. If this is your case, you can use https://mapy.geoportal.gov.pl/wss/service/WMTS/guest/wmts/BDOT10k, a different WMTS service based on BDOT10k data and intended for larger scales (Fig. 5). 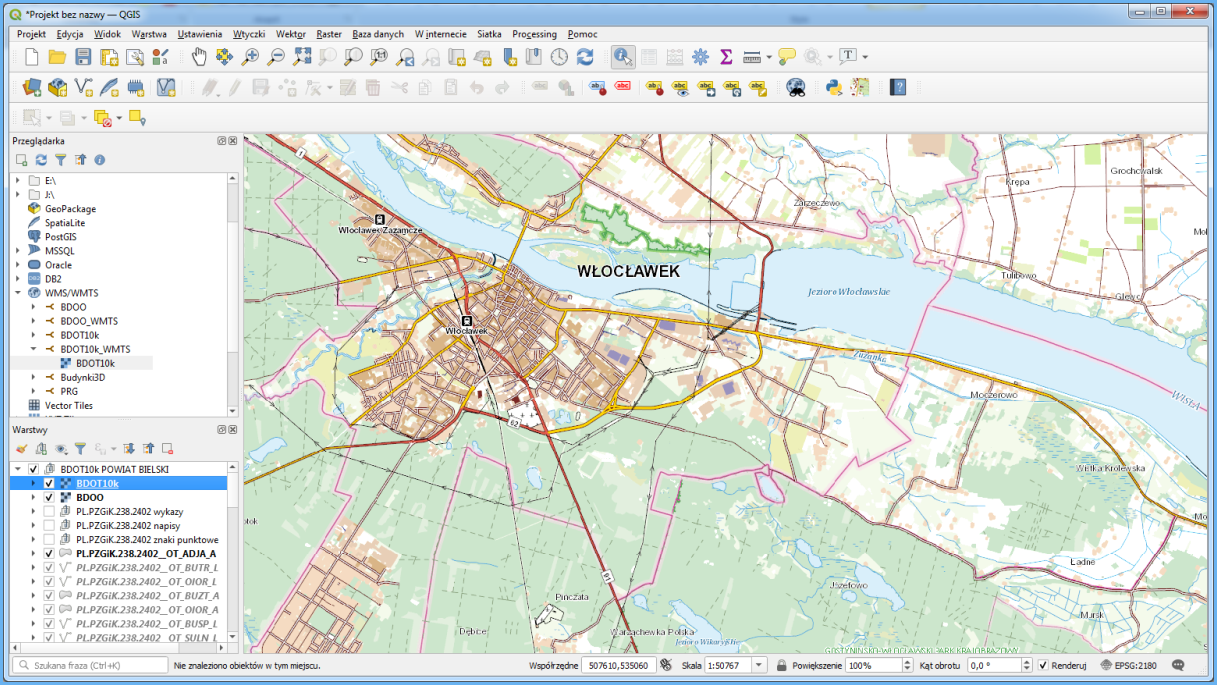 If you want to run the service in QGIS, specify service URL, including "service" and "request" parameters during connection: https://mapy.geoportal.gov.pl/wss/service/PZGIK/BDOO/WMTS/2021?service=WMTS&request=GetCapabilities

Apart from the aforementioned WMTS which displays BDOO data, a WMS is also available (https://mapy.geoportal.gov.pl/wss/service/PZGIK/BDOO/WMS/2021) to display particular BDOO layers.

Moreover, a service at https://mapy.geoportal.gov.pl/wss/service/PZGIK/BDOO/WMTS/2015 is also available to display archive BDOO data from 2015.

BDOO data is provided free of charge and can be used for any purpose. Data can be downloaded from www.geoportal.gov.pl, section „Data for download", group "Topography", layer „BDOO data”. Turn on this layer and click any area of Poland to access and download data in GML format for the voivodship or entire Poland, as appropriate for the clicked location (Fig. 6). You can access both data elaborated in 2015 and current data obtained as a result of automatic BDOT10k data generalization. 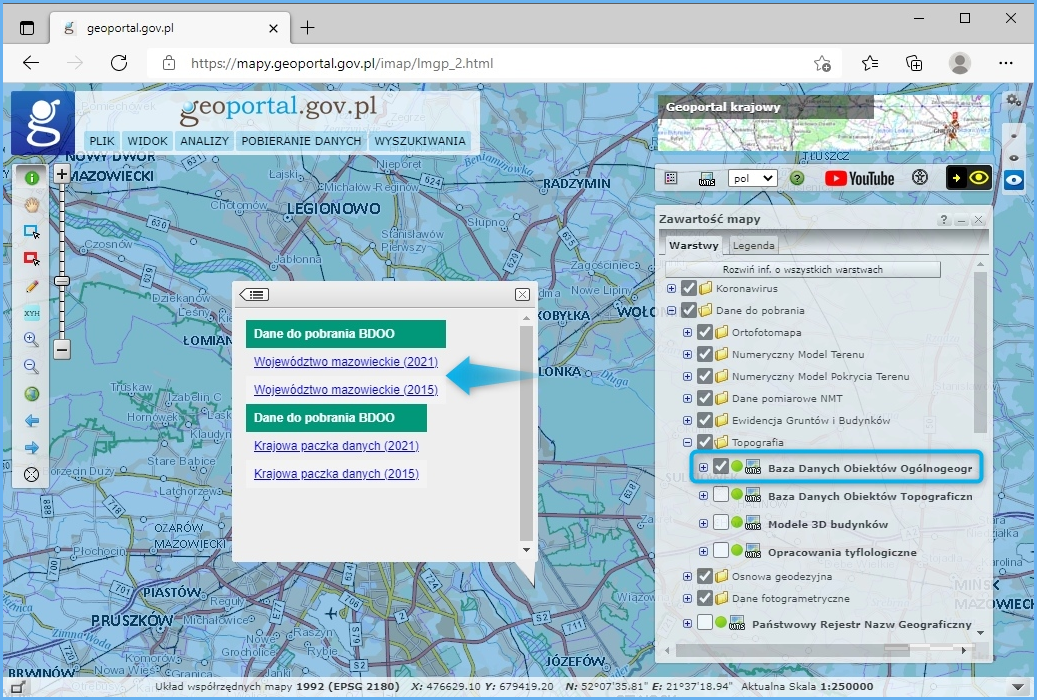 As illustrated above, BDOO data is downloaded via a dedicated WMS: https://mapy.geoportal.gov.pl/wss/service/PZGIK/BDOO/WMS/PobieranieBDOO, specifically via the GetFeatureInfo feature which shares a link to download the relevant BDOO data file (i.e. the relevant voivodship or country package) as an attribute in the clicked location. If you connect the service to QGIS or other software, you can use such software to directly download BDOO data (Fig. 7). 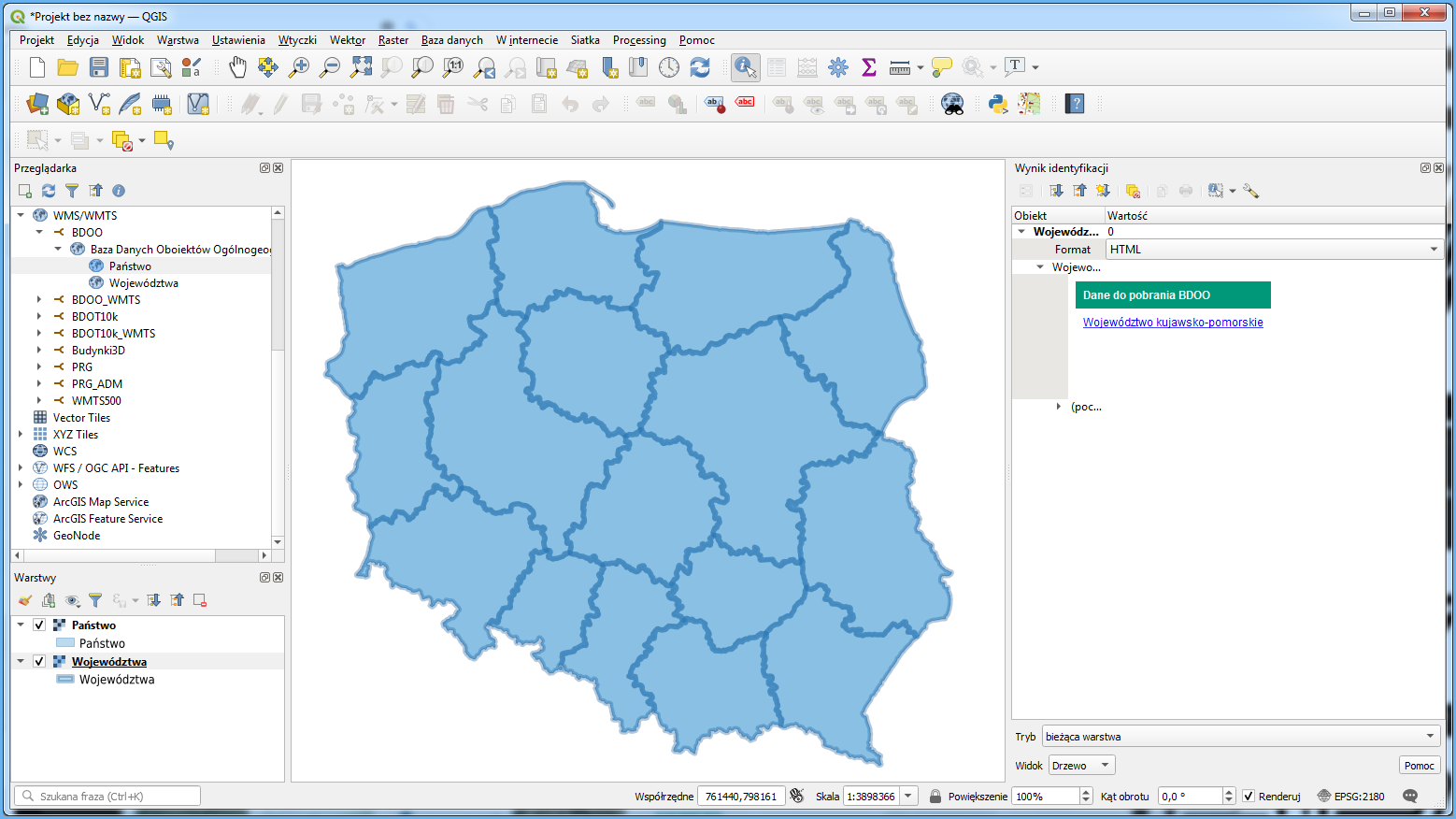