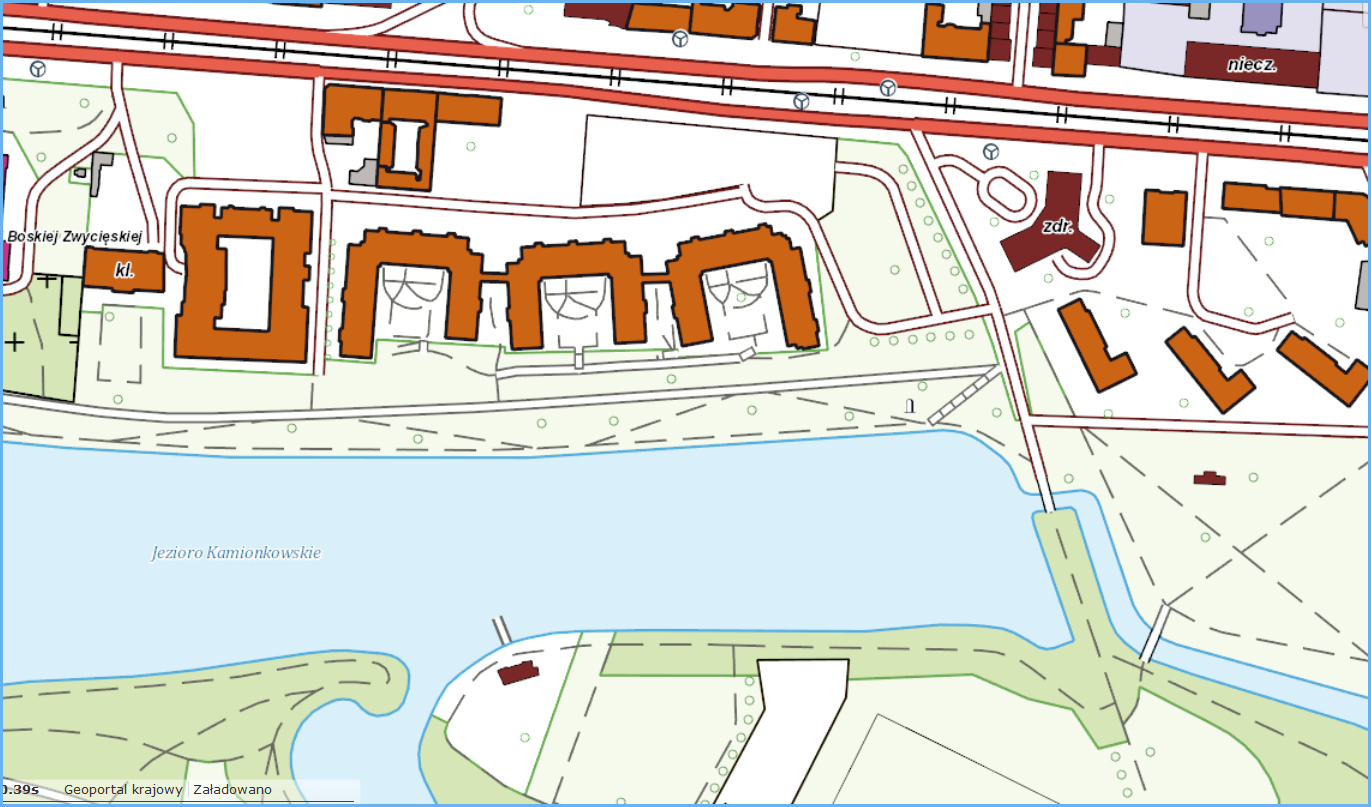 The detailed scope of information collected in BDOT10k, as well as the arrangement, procedure, and technical standards to create, update, verify and share this data is governed by the Regulation of the Minister of Development, Labour and Technology of 27 July 2021 on the topographic objects database and the database of general geographical objects, as well as standard cartographic studies.

At the moment, the BDOT10k database contains ca. 60 million objects. The BDOT10k data release implemented on 31 July 2000 made this data available to anyone for any purpose. Free QGIS software is a great tool for BDOT10k data visualization and analysis. Due to the broad range of topics covered by BDOT10k data, it is best to use the BDOT_10k_GML_SHP plug-in provided by the Head Office of Geodesy and Cartography (GUGiK) for the import and presentation of this data. It provides a data image similar to a traditional topographic map at the scale of 1:10,000, as shown in Fig. 2. 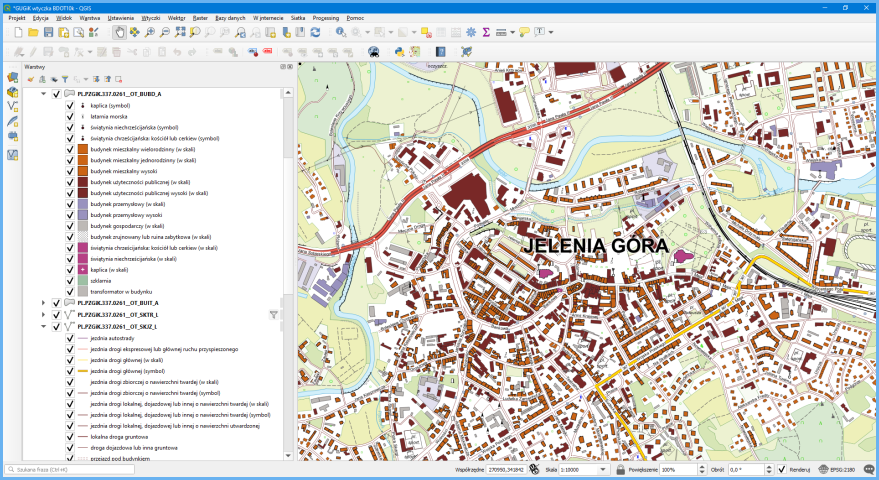 The BDOT10k data was combined with other available data or services such as Digital Elevation Model (DEM) to expand the functionalities of data visualization and analysis. An example is shown in Fig. 3.

Figure 3. Visualization of BDOT10k data on the Digital Elevation Model

Apart from the operations performed directly on the downloaded BDOT10k data, for example by means of QGIS, another really useful tool is a dedicated map portal at https://bdot10k.geoportal.gov.pl. This portal provides easy and user-friendly access to the BDOT10k database of entire Poland for visualization and analysis. Fig. 4 shows a home screen that appears upon access to the portal. 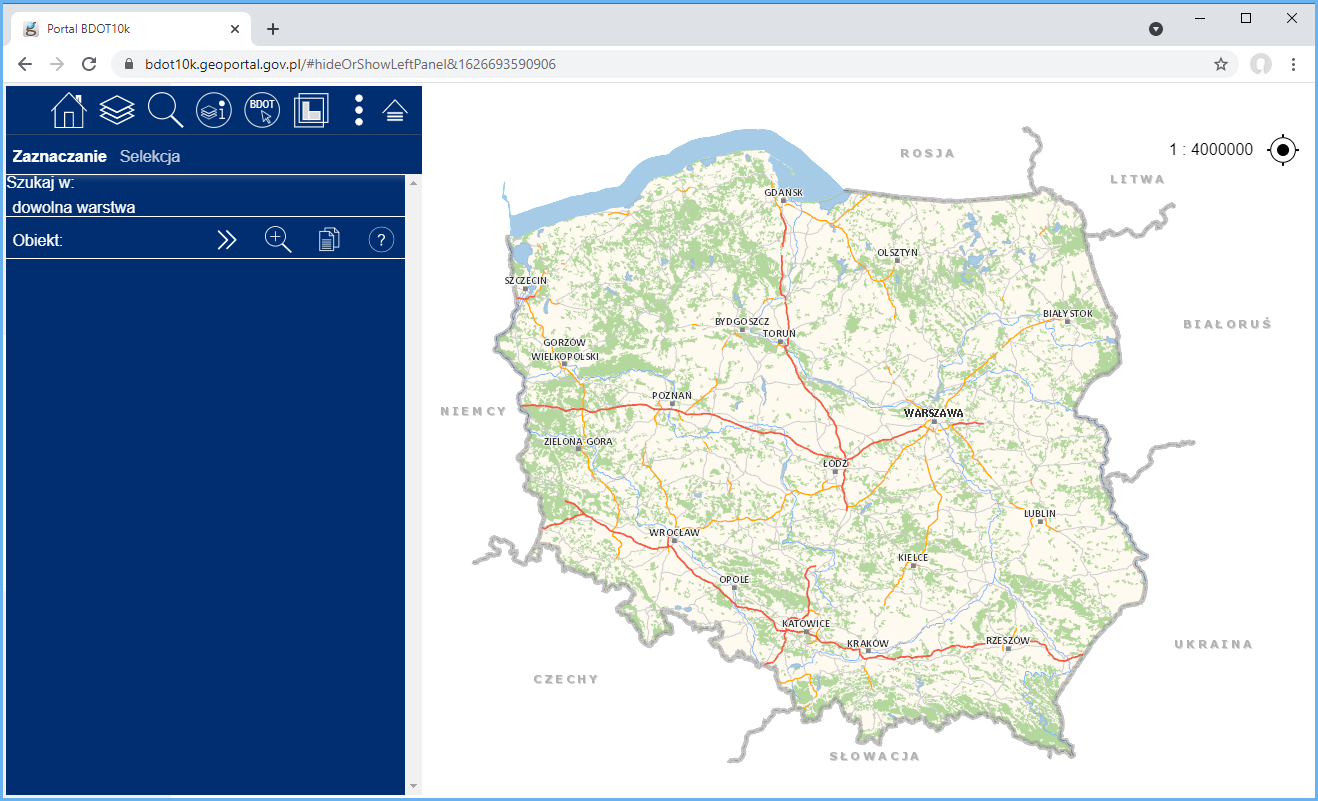 The layer tree of the portal is divided into two groups of layers – the first one, Warstwy bazy BDOT10k (BDOT10k database layers), directly reflects the BDOT10k database, whereas the other one, Warstwy podkładowe (Base layers), contains layers based on the available WMS and WMTS data display services. To show or hide BDOT10k layers, you can either enable respective items from the layer tree or simply use the nine large icons displayed at the top of the screen (Fig. 5).

The portal supports numerous queries for properties of BDOT10k objects and the dependencies between them. The functionality is not complicated and all the user has to do is to create a few simple selection criteria (Figs. 6 and 7).

Figure 6. Available criteria regarding BDOT10k objects and dependencies between them

Fig. 7 shows selection criteria which return hotel buildings situated in Lublin whose area is 400-600 m2. When selection criteria are defined, run the query to get the result of the analysis after just a moment, as shown in Fig. 8. 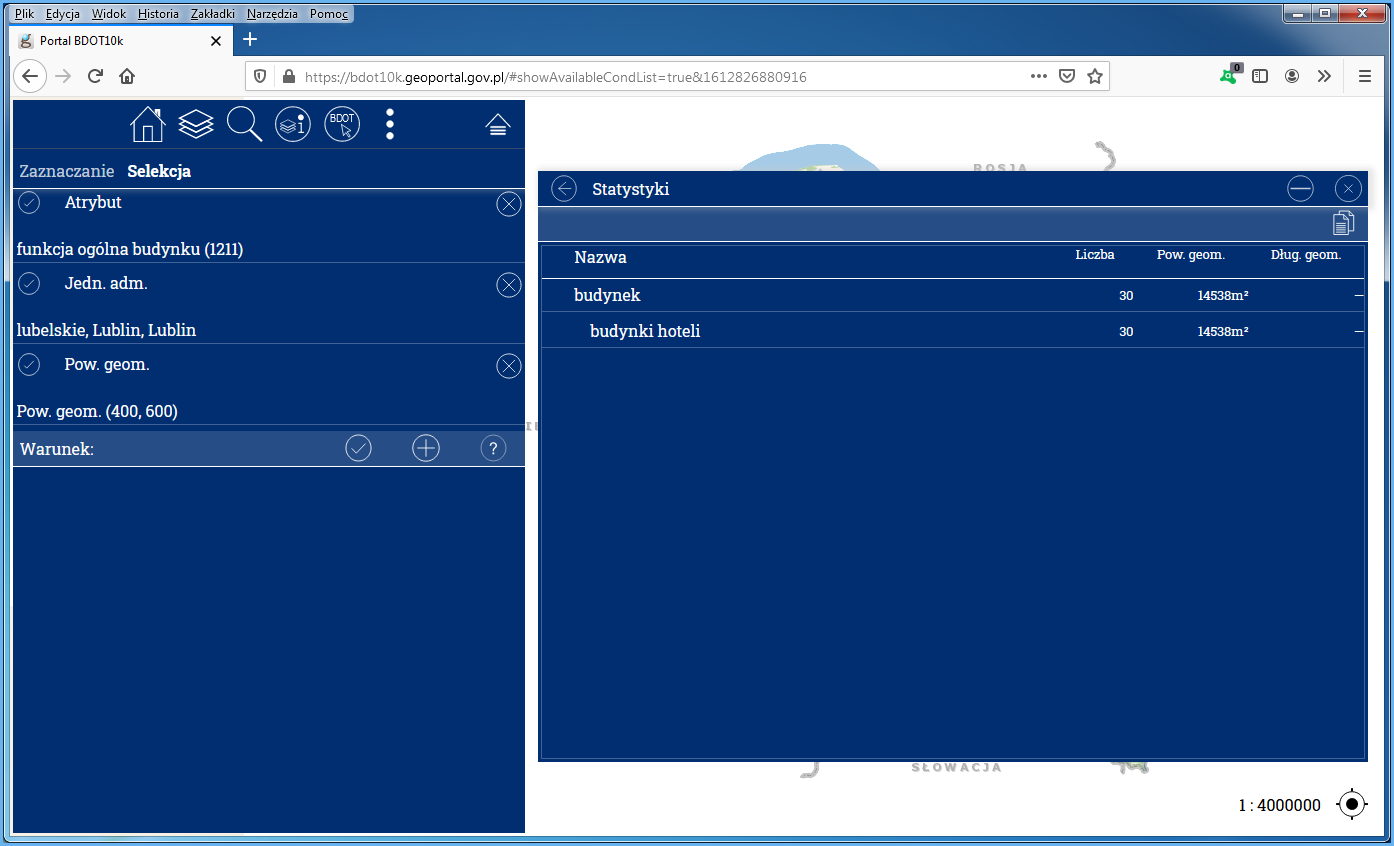 Figure 8. Selection results for hotel buildings situated in Lublin whose area is 400-600 m2

From the selection results pane, you can display any of the selected objects using the functionalities on the list of objects.

BDOT10k data can be browsed using WMS and WMTS which are by default connected to www.geoportal.gov.pl. However, these services can also be connected to any software that supports such standards. The key services in this fields include:

Information on all services related to BDOT10k managed by the Head Office of Geodesy and Cartography can be found in the main menu of www.geoportal.gov.pl under tab „Services / View services (WMS and WMTS)” (Fig. 9).

The application of the WMTS browsing functionality for BDOT10k in QGIS is shown in Fig. 10. 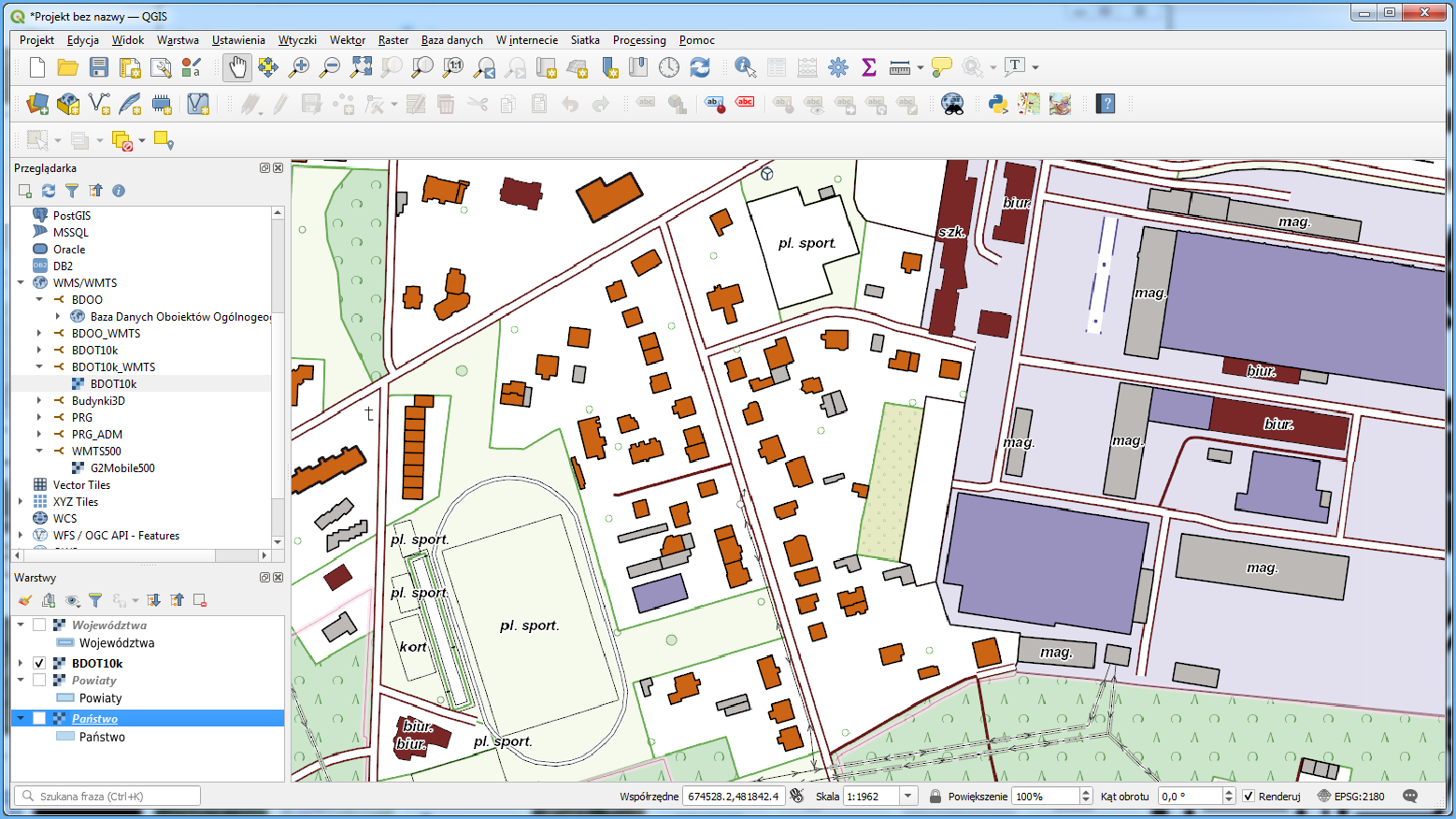 WMTS should display BDOT10k data at the scale of 1:50,000 or larger, up to 1:1,000. At smaller scales, data will not be displayed because there are no tiles generated for them. Use WMS on https://mapy.geoportal.gov.pl/wss/service/pub/guest/kompozycja_BDOT10k_WMS/MapServer/WMSServer if this is your case (Fig. 11). 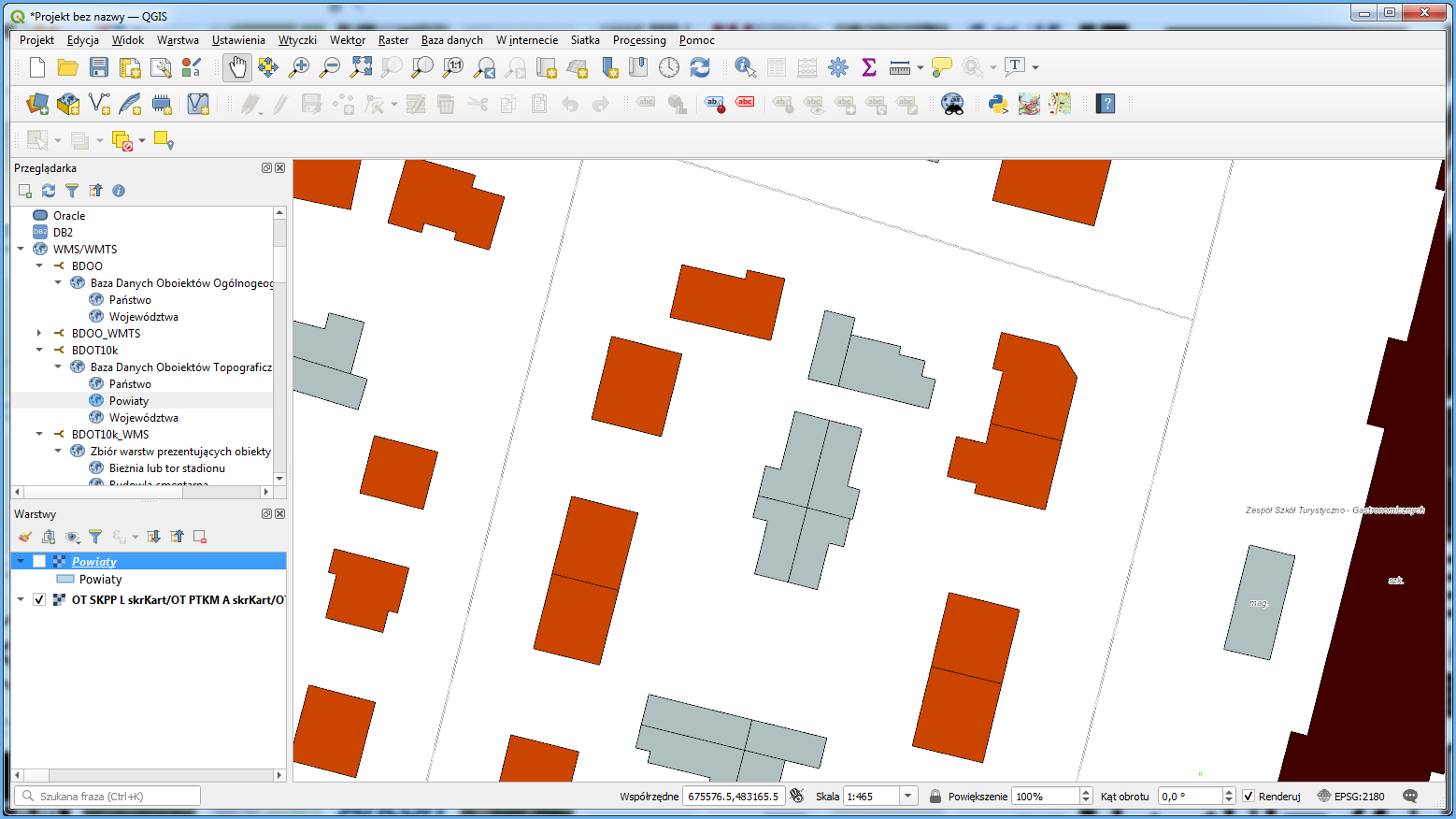 Apart from the services described above, you can also use WMTS available at http://mapy.geoportal.gov.pl/wss/service/WMTS/guest/wmts/G2_MOBILE_500. This service is a special blend of BDOT10k and BDOO which presents some basic spatial data for the whole area of Poland in an appealing manner, and can be easily used as a base map for various specialist elaborations. It is best to combine the aforementioned service with WMS and address details available at https://integracja.gugik.gov.pl/cgi-bin/KrajowaIntegracjaNumeracjiAdresowej to get an image of the land conditions supplemented by addresses and street names (Fig. 12). 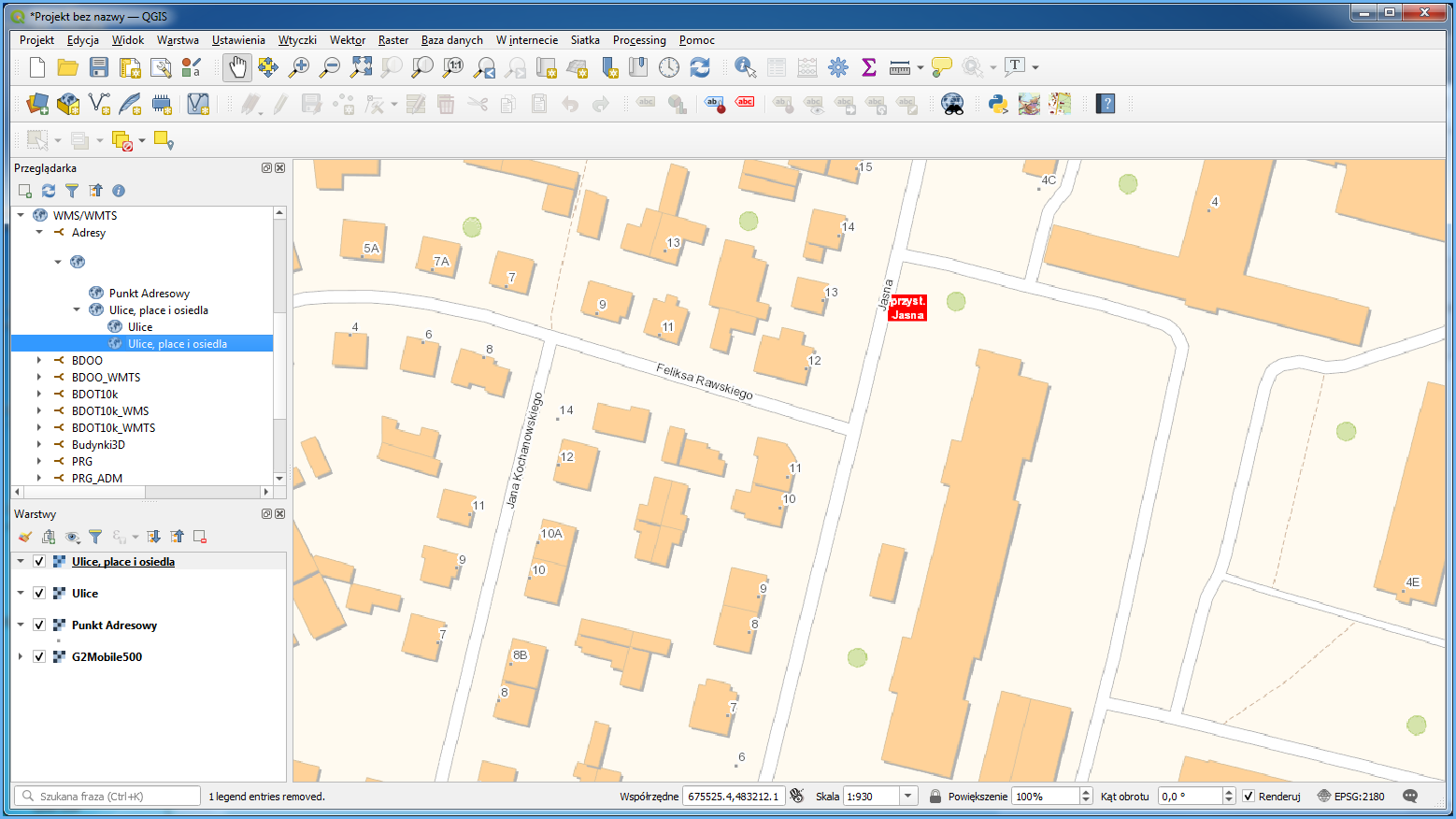 Figure 12. Example of base map visualization with addresses

The BDOT10k database is provided free of charge and can be used for any purpose. Data can be downloaded from www.geoportal.gov.pl, section "Data for download", group "Topography", layer "BDOT data". Turn on this layer and click any area of Poland to access and download data for the county, voivodship or entire Poland, as appropriate for the clicked location (Fig. 13). 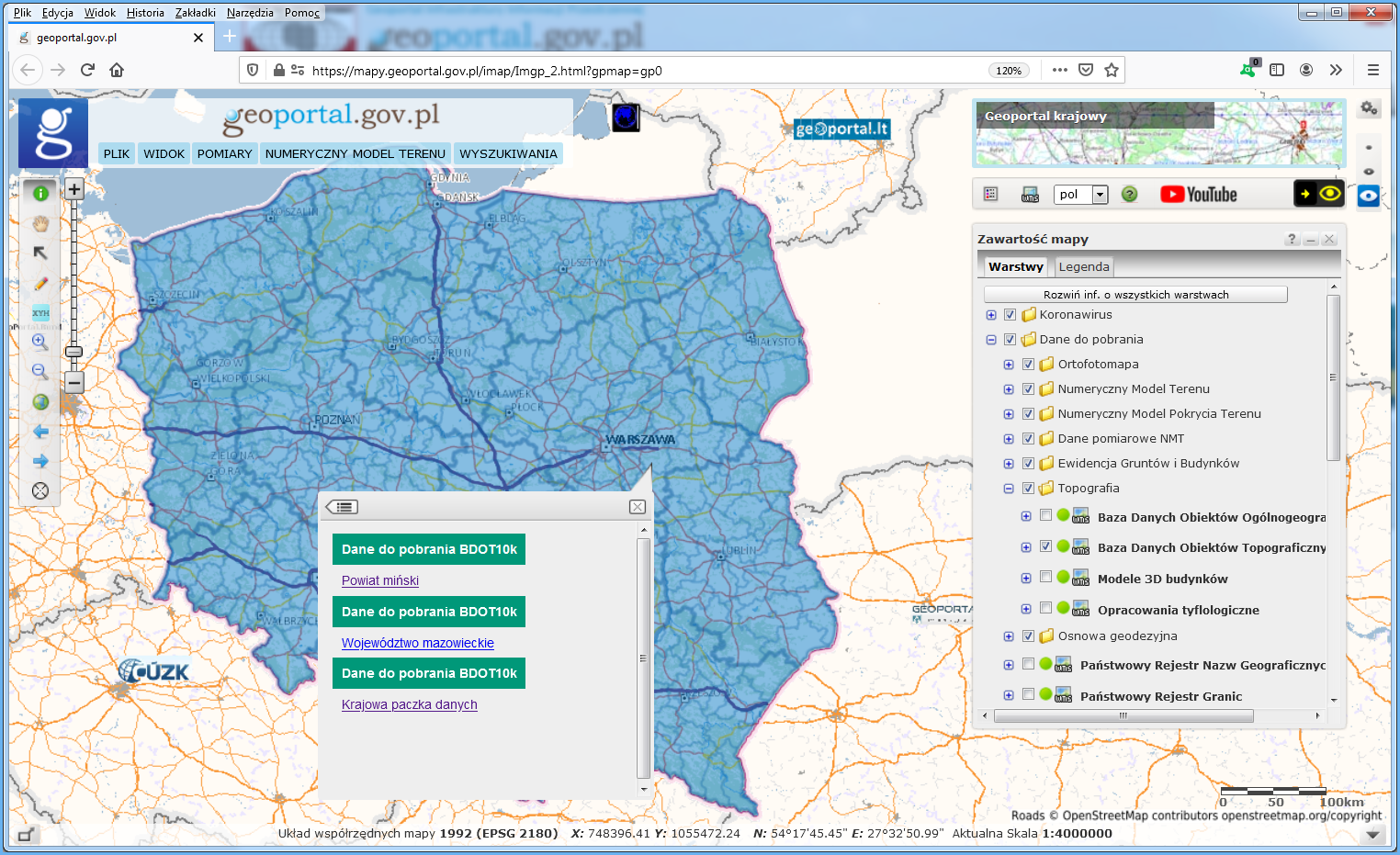 BDOT10k data at www.geoportal.gov.pl is downloaded via WMS: https://mapy.geoportal.gov.pl/wss/service/PZGIK/BDOT/WMS/PobieranieBDOT10k, specifically via the GetFeatureInfo feature which shares a link to download the relevant BDOT10k data file (i.e. the relevant county, voivodship or country package) as an attribute in the clicked location. If you connect this service to QGIS or other software, you can use such software to directly download BDOT10k data for the specific county, voivodship or country (Fig. 14). 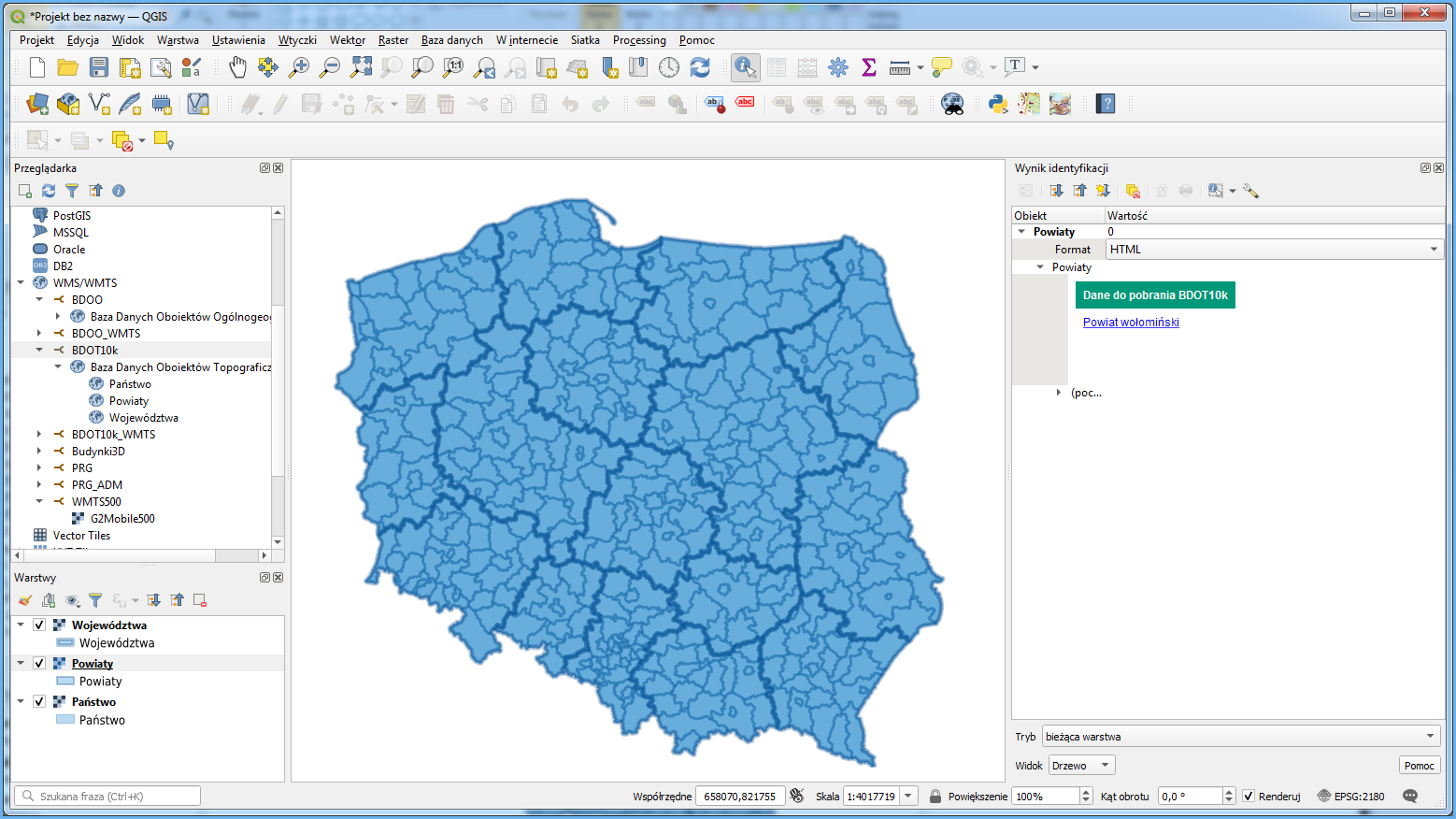