A topographic map is a cartographic representation of general-purpose geographic content, especially topographic objects and features, at scales from 1:10,000 to 1:100,000. Standards for the development of topographic maps are specified by the Regulation of the Minister of Development, Labour and Technology of 27 July 2021 on the topographic objects database and the database of general geographical objects, as well as standard cartographic studies. Topographic maps are designed to meet a variety of economic needs, including, without limitation, the need to perform geodetic and cartographic calculations, to prepare and implement spatial development plans, to solve scientific and research problems, to study the terrain and assess its specificity, to provide a base map for the development of thematic maps, to provide a base for crisis management purposes, military purposes, for tourism, or for archeology. Topographic maps reflect the condition of the terrain, its typical features and characteristics in a reliable manner and with a detail appropriate to the scale. The picture of the terrain is presented by means of conventional graphic symbols in accordance with map compilation rules.

Topographic maps available at the central level of the National Geodetic and Cartographic Resources (hereinafter referred to as "NGCR") have been developed in line with previously applicable regulations, based on field measurements, photogrammetric methods, or combined methods. They are available at the scales of 1:10,000, 1:25,000, 1:50,000 and 1:100,000 and made in the "1942", "1965", "1992" , "GUGiK 80" and "WGS-84" coordinate systems. Topographic maps are made available in the form of raster files (map scans) in tiff or geotiff format, or in print.

Moreover, maps at the scale of 1:50,000 made in the WGS-84 system, so called "Vector Smart Map Level 2" – abbreviated as VMap2 – are available in shapefile format. The content of this elaboration is defined by the conceptual scheme including 110 feature classes grouped in nine thematic layers: boundaries, relief, physiographic features, transportation, buildings and facilities, hydrographic features, vegetation, industrial features, aeronautic features. These are double sheet maps.

In addition, the NGCR also includes approximately 3,000 sheets of digital topographic map in the basic version (of skeleton lines) developed in accordance with the instruction called "Principles of 1:10,000 Topographic Maps Compilation. Symbol Models" (1999). These maps are available in dgn format. 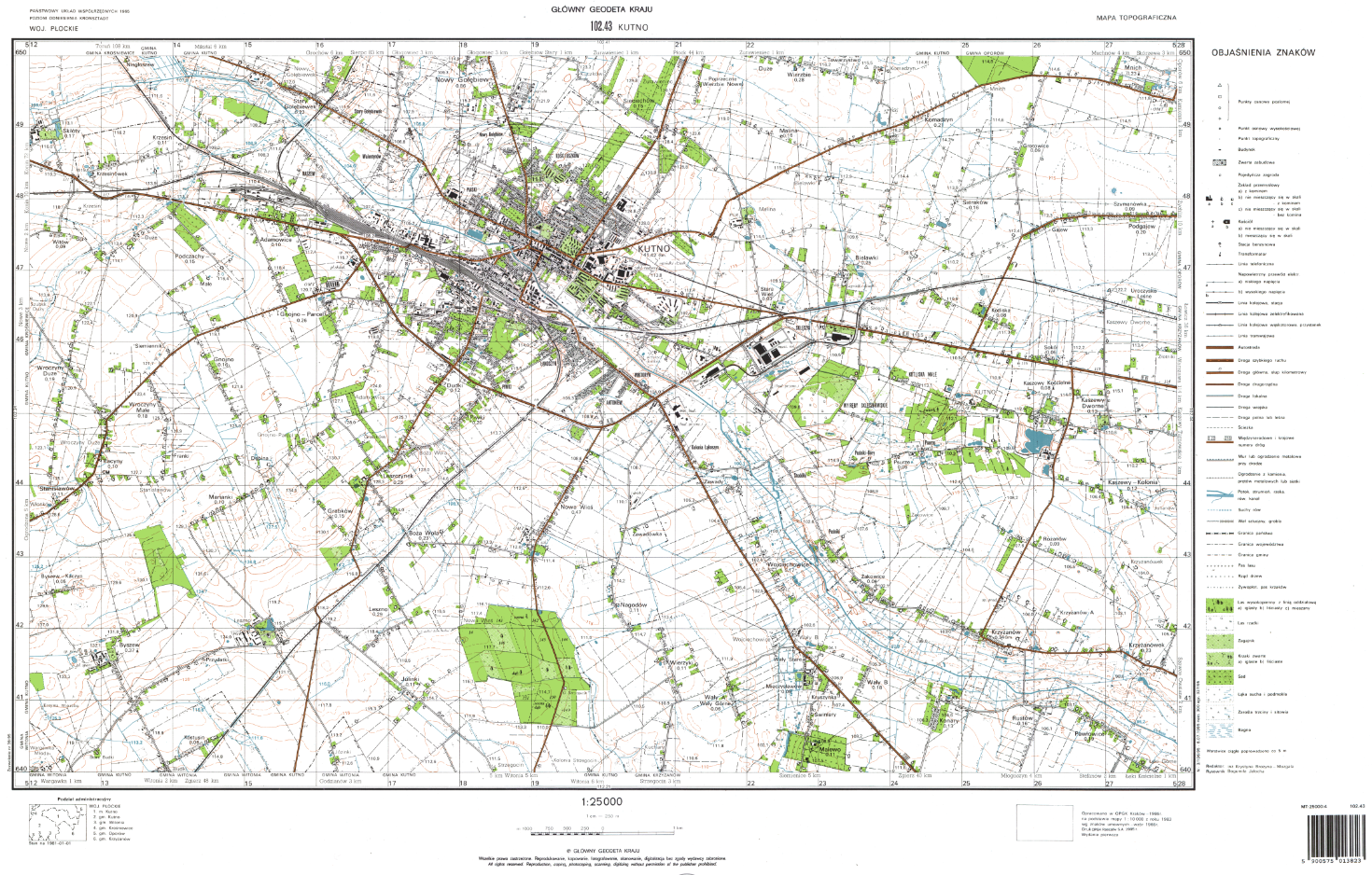 In 2011, a general geographic map at the scale of 1:500,000 (Fig. 2) commissioned by the Head Office of Geodesy and Cartography (GUGiK) was developed. The map was developed in a cylindrical, transversal, equiangular Gauss-Kruger projection with meridian 19° east of Greenwich, in the "1992" flat rectangular coordinate system. The map is shared in digital version in PostScript vector format (*.eps) or raster PDF format. 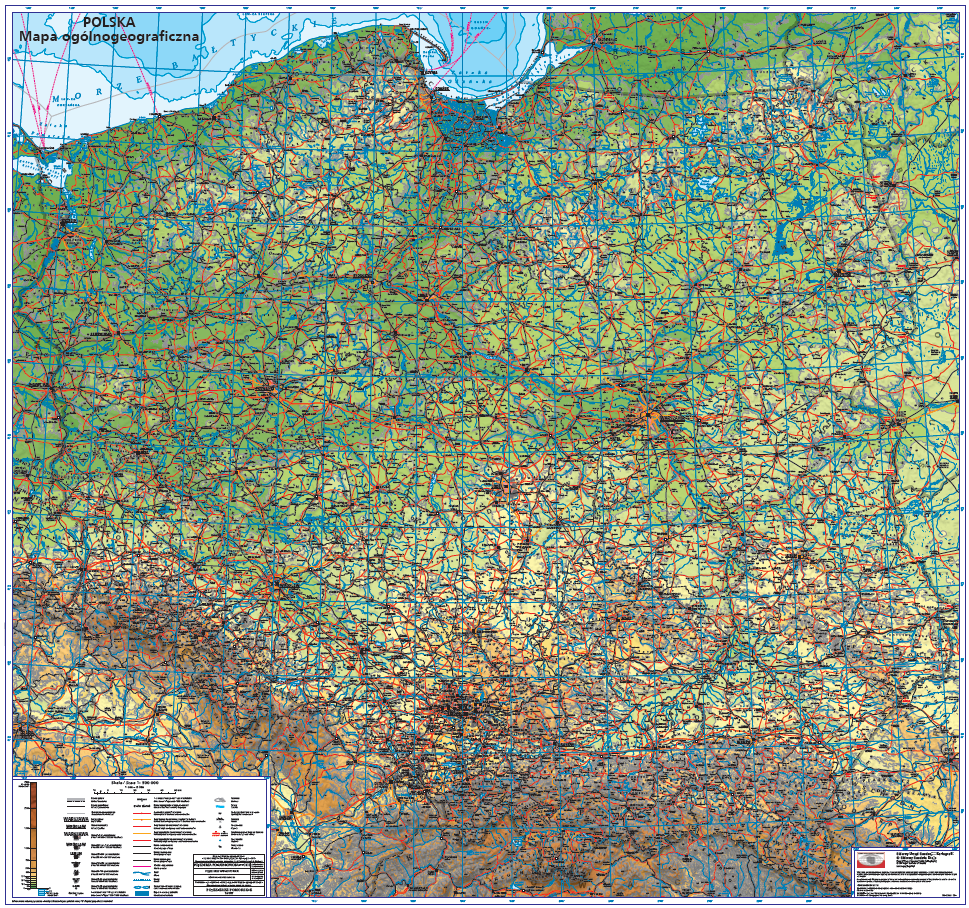 The Hydrographic Map of Poland shared at the NGCR shows the instantaneous state and conditions of the water cycle during the mapping period in relation to the geographical environment. This map was developed on the basis of a topographic map at the scale of 1:50,000 in the following flat rectangular coordinate systems: "PL-1942", "PL- 1965" and "PL-1992". The content of the map is supplemented by comments at the back of the map. Comments to the hydrographic map include general natural characteristics of the area represented on the sheet and, among other things, characteristics of precipitation, surface and underground waters with particular emphasis on their pollution, and transformations of hydrographic conditions. 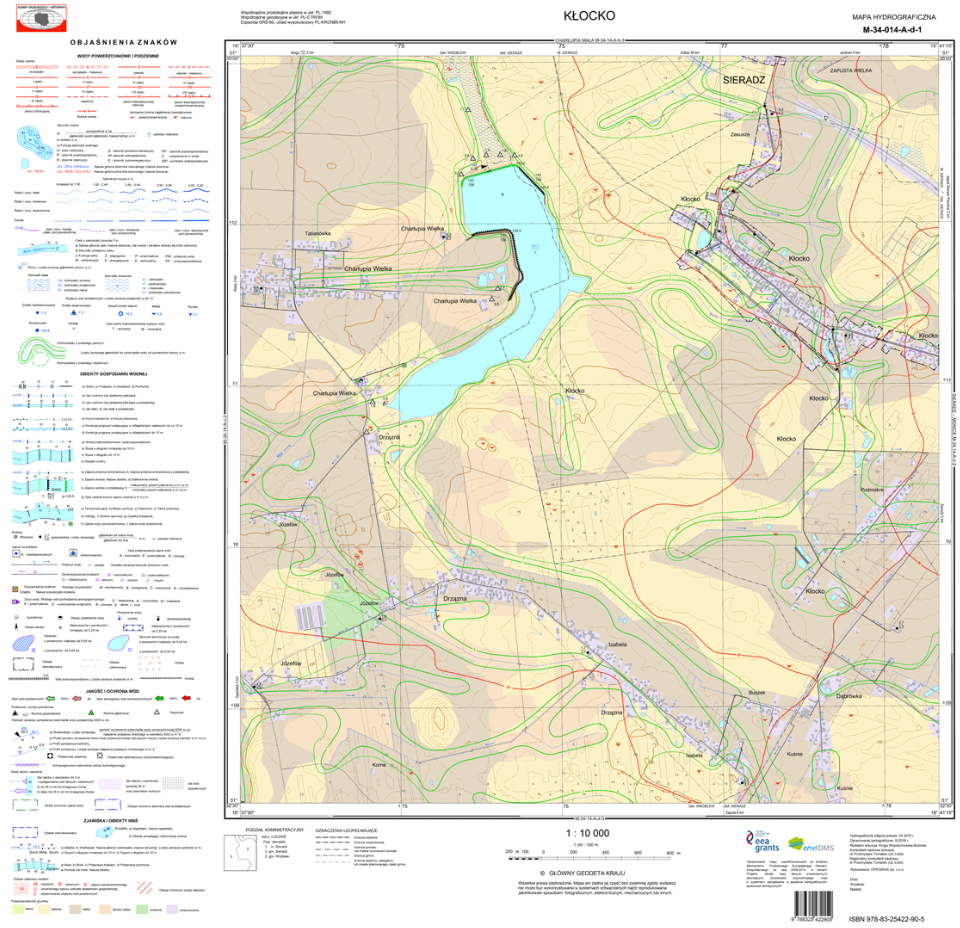 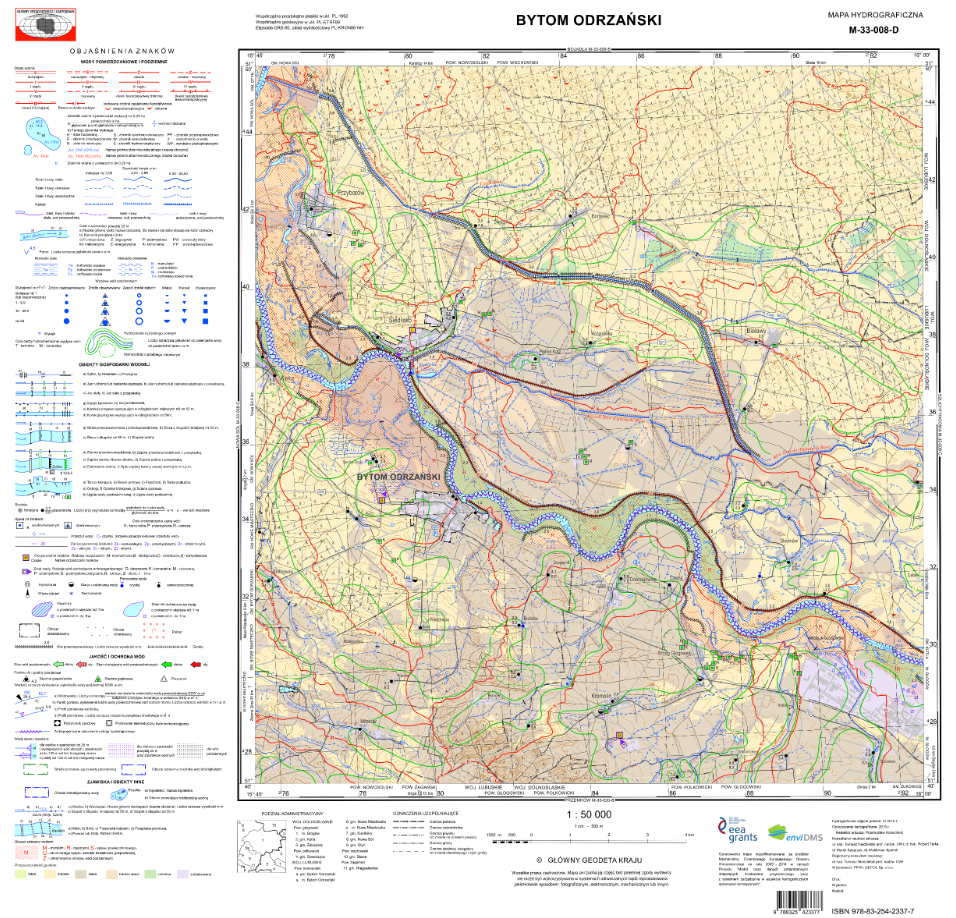 Figure 4. Example of an EnviDMS Hydrographic Map of Poland at scale 1:10,000

The Sozological Map of Poland is a map that shows the condition of the natural environment, as well as the causes and effects of transformations taking place in the environment under the influence of various processes. It also shows the ways of protecting the natural values of this environment. This map was developed on the basis of a topographic map at the scale of 1:50,000 in the following flat rectangular coordinate systems: "PL-1942" and "PL-1992". The content of the map is supplemented by comments at the back of the map. Comments to the sozological map also include, among other things, information on threats to and degradation of surface and underground waters, a general assessment of the condition of the environment, and indications for its development and protection. 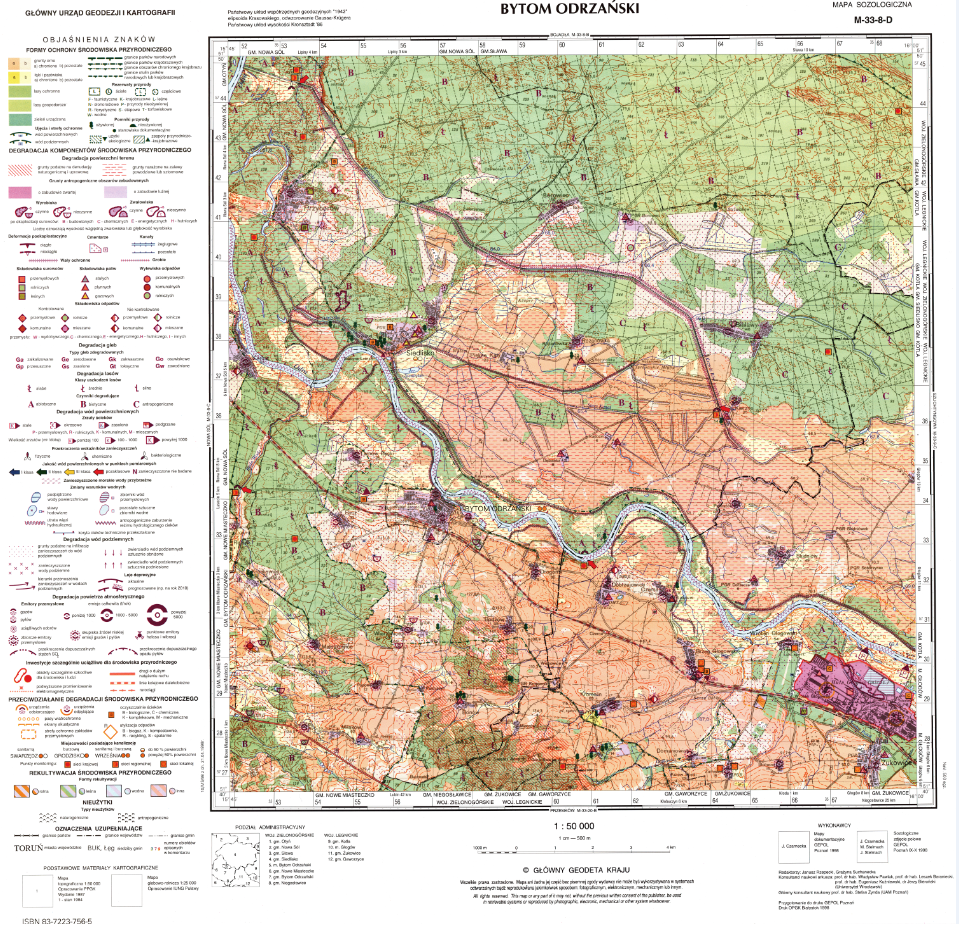 The Administrative Map of Poland represents administrative borders of voivodships, counties and cities with county rights, borders of communes, cities within communes, and borders of Warsaw districts. The map was developed in the "PL-1992" flat rectangular coordinate system at the scale of 1:500,000, in a cylindrical, transversal, equiangular Gauss-Kruger projection with meridian 19° east of Greenwich. 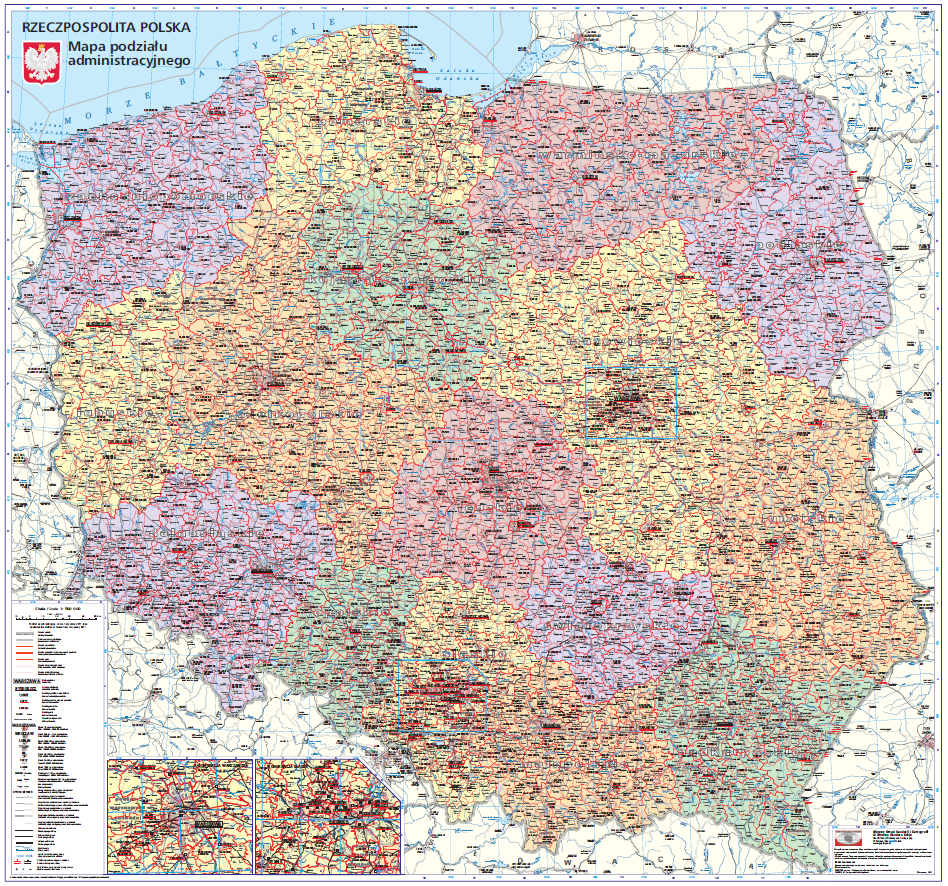 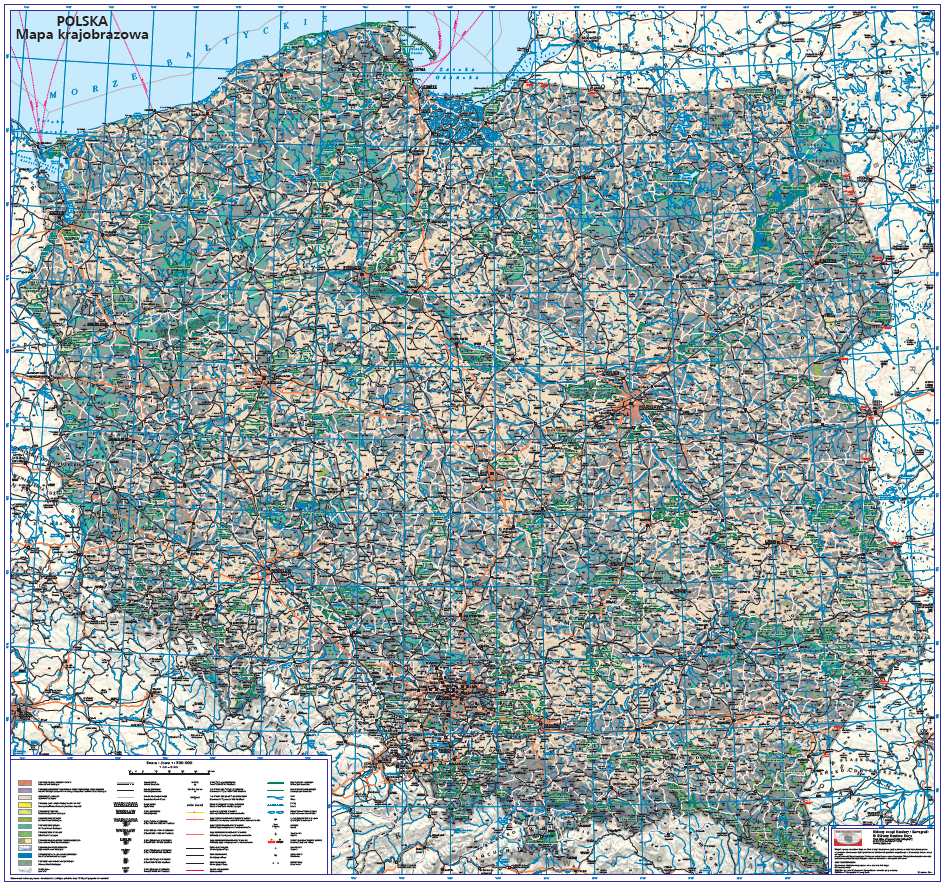 The Soil and agricultural map represents the spatial variability of soil sites and provides information on major physical properties and agricultural usefulness of soil. The NGCR provides soil and agricultural maps at the scale of 1:5,000. They cover the area of the Kujawsko-Pomorskie, Opolskie, Podlaskie and Warmińsko-Mazurskie Voivodships and are shared in digital form as soil sections and map scans in raster (tif) format. 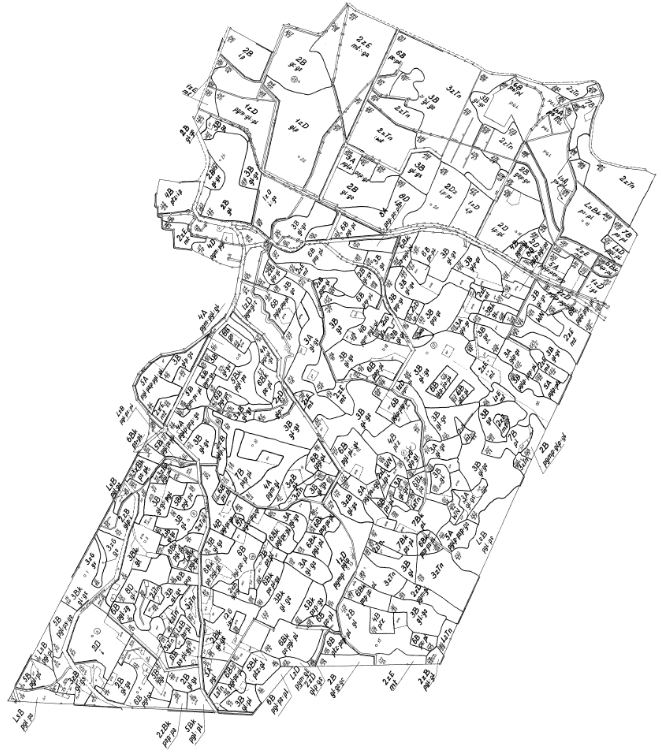 The „"Geographic Atlas of Poland" for the blind and visually impaired is a comprehensive elaboration intended for the blind that covers general geographic and thematic issues regarding the area of Poland. The atlas consists of 34 maps compiled in two volumes. The contents of the maps cover three thematic groups: the geographic environment of Poland (11 boards), socio-economic issues (19 boards), and Poland in the broader geographic and political context (4 boards).

The atlas has been compiled in two versions:

Figure 9. Examples of maps compiled for printing and thermal embossing with the use of swell paper

Figure 10. Examples of maps compiled for printing and embossing by thermal forming

Figure 11. Examples of maps compiled for printing by thermal forming

Digital files are available free of charge in both vector (CDR files) and raster (PDF, TIF and JPG files) formats.

Topographic maps, general geographic maps, and thematic maps can be browsed using WMS and WMTS services which are normally connected to www.geoportal.gov.pl. These services can also be connected to any software that supports such standards (e.g. QGIS). 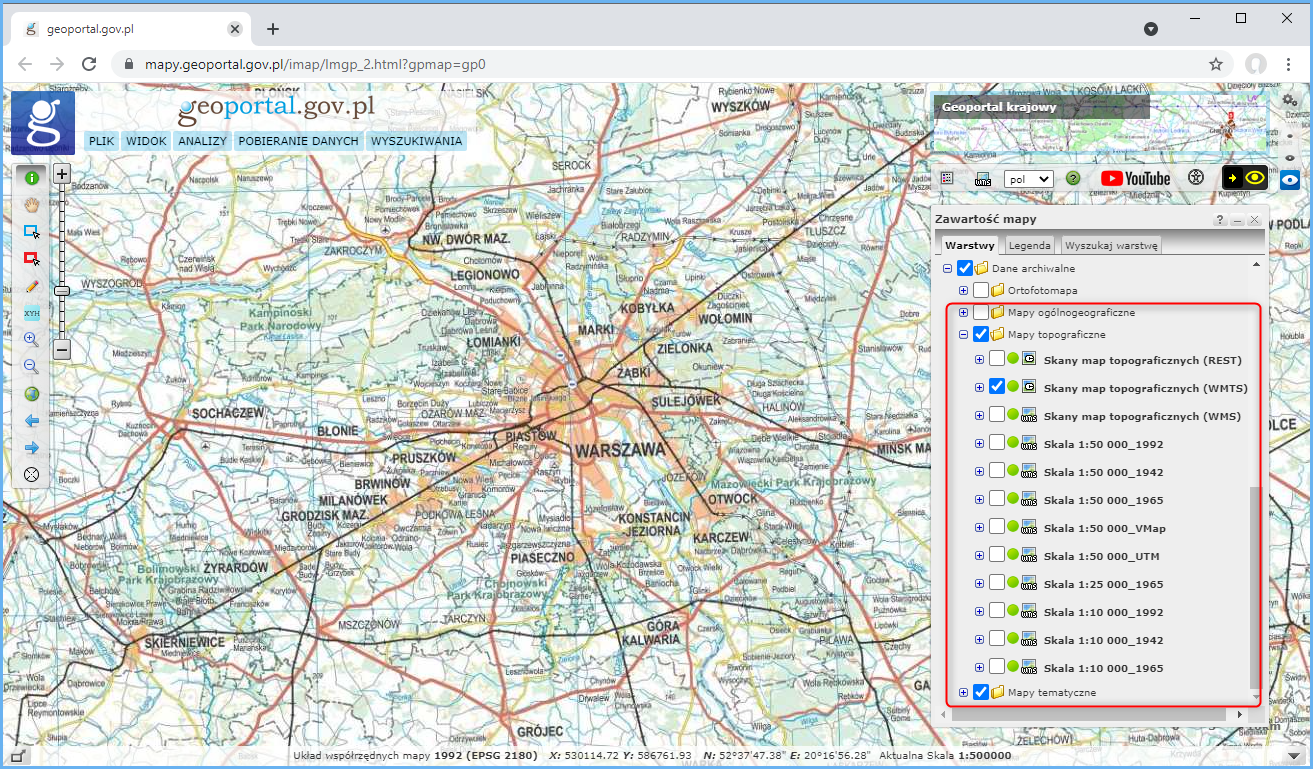 Figure 12. Sample presentation of a topographic map in Geoportal

Information on all services that present topographic maps, general geographic maps, and thematic maps maintained by the Head Office of Geodesy and Cartography can be found in the main menu of www.geoportal.gov.pl under tab „Services / View services (WMS and WMTS)” (Fig. 13). 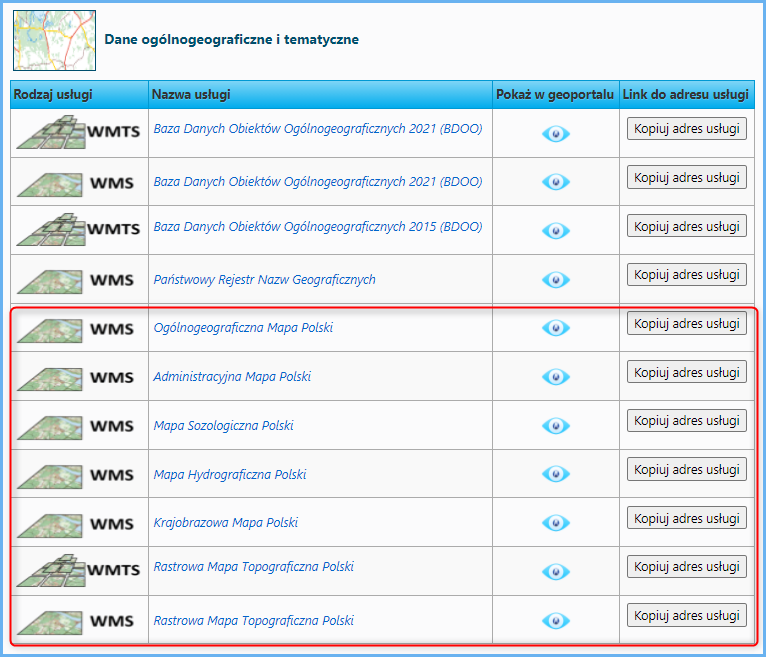 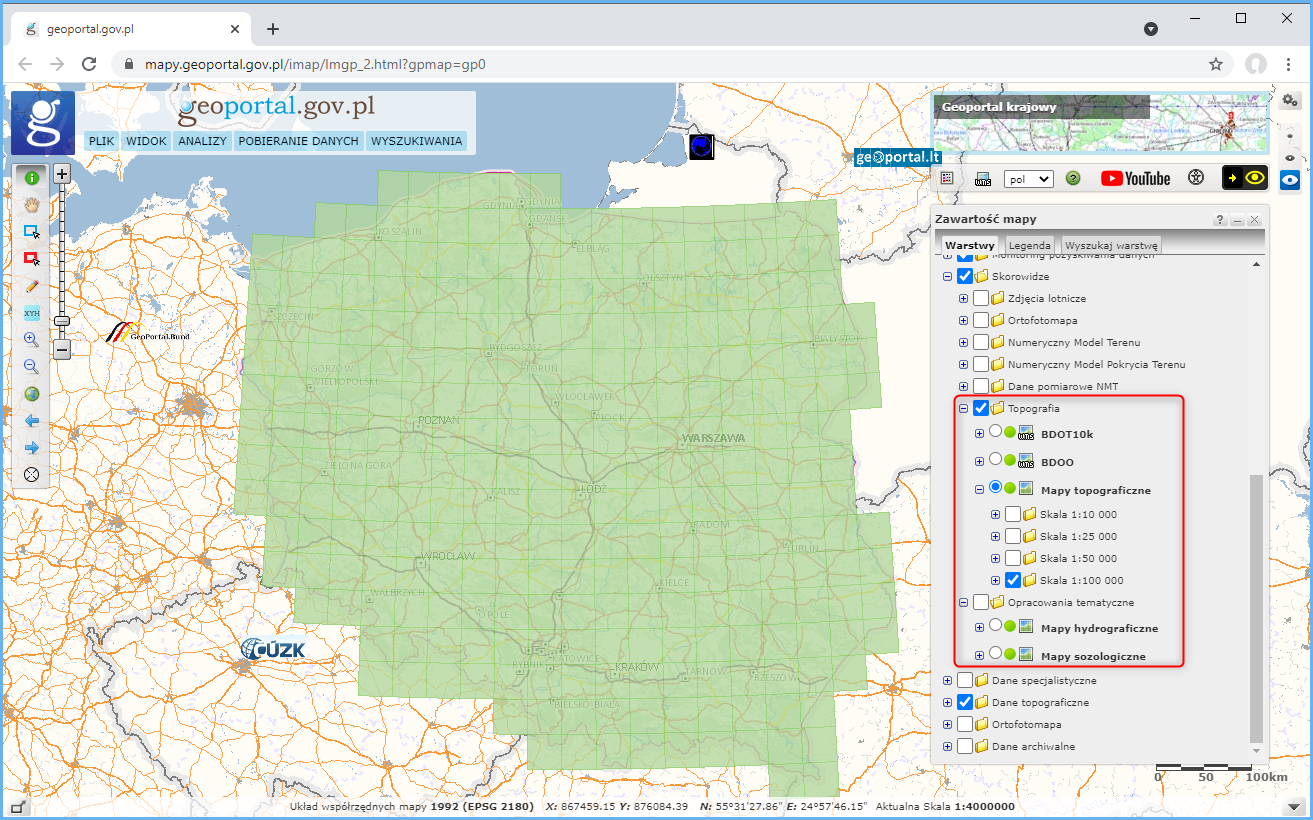 Topographic, general geographic, thematic, and special maps are shared upon request for access to materials of the National Geodetic and Cartographic Resources or via the NGCR WEBSITE

Digital special maps are provided free of charge and can be used for any purpose. Digital special maps can be downloaded from www.geoportal.gov.pl, section "Data for download", group "Topography", layer "Typhlological studies". Turn on this layer and click any area of Poland to access digital maps intended for the blind (swell paper or thermal forming) (Fig. 16). 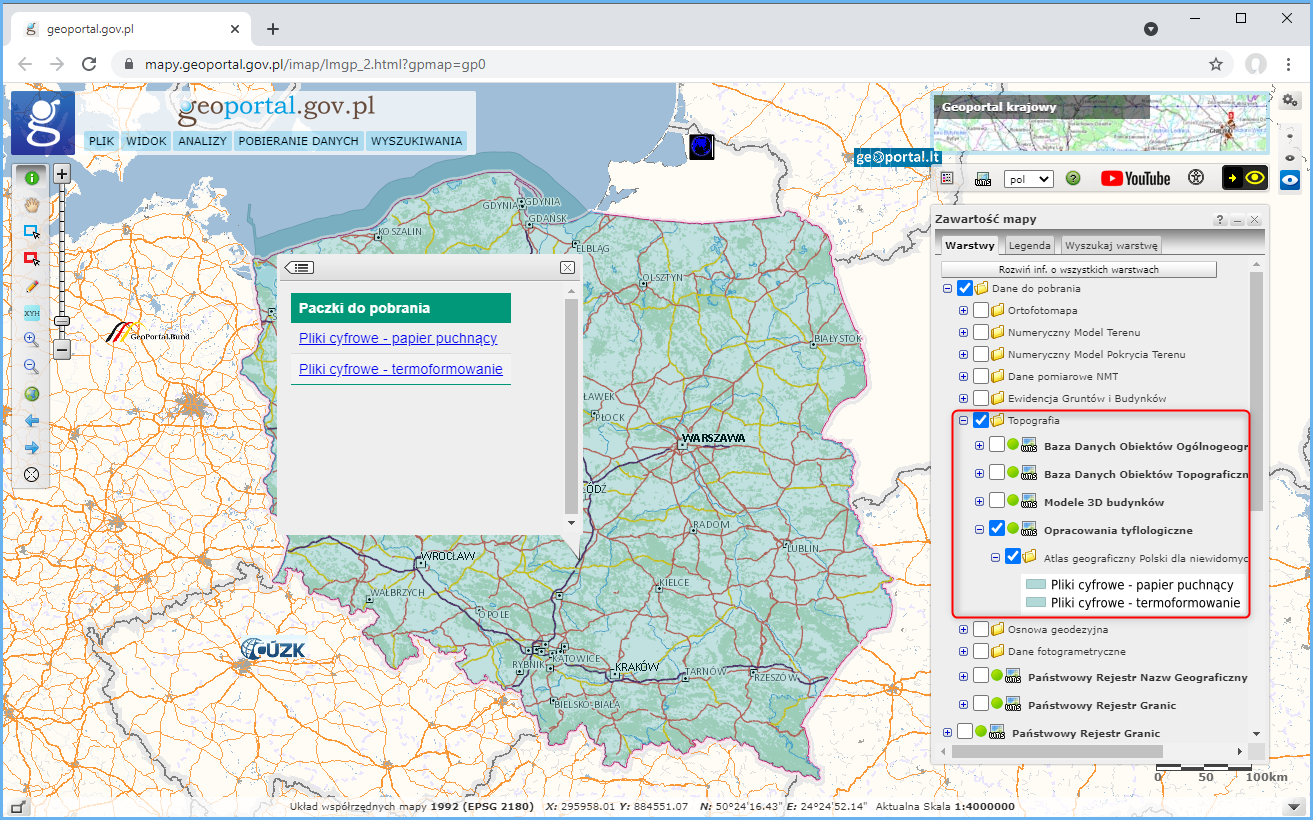 Elaborations intended for the blind at www.geoportal.gov.pl are downloaded via WMS, specifically via the GetFeatureInfo feature which shares a link to download the relevant map as an attribute in the clicked location.