The Digital Elevation Model (DEM) is a discrete (point-based) representation of land surface elevation. It uses an interpolation algorithm to calculate the elevation at any point of a surface covered by the constructed model. Generally, there are two basic types of DEM based on different geometric structures:

GRID - model based on a regular square mesh;

TIN - model based on an irregular triangle mesh.

Each of these models has specific advantages and disadvantages which determine their applications. The essence of the TIN model is e.g. storage of original measurement data, while in the GRID model, elevations at nodal points are mostly assigned interpolated values. 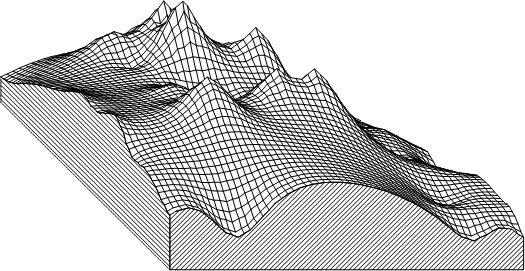 Pursuant to the Geodetic and cartographic law act, the person responsible for the maintenance of the DEM database is the Surveyor General of Poland.

Information on all services related to the DEM managed by the Head Office of Geodesy and Cartography can be found in the main menu of www.geoportal.gov.pl under tab „Services / View services (WMS and WMTS)" (Fig. 3).

In terms of DEM, WMS and WMTS are key services which present DEM as shading models:

The image shown in Fig. 4 is generated via WMS using a query.

Fig. 5 shows WMTS related to the digital elevation model and connected to QGIS. 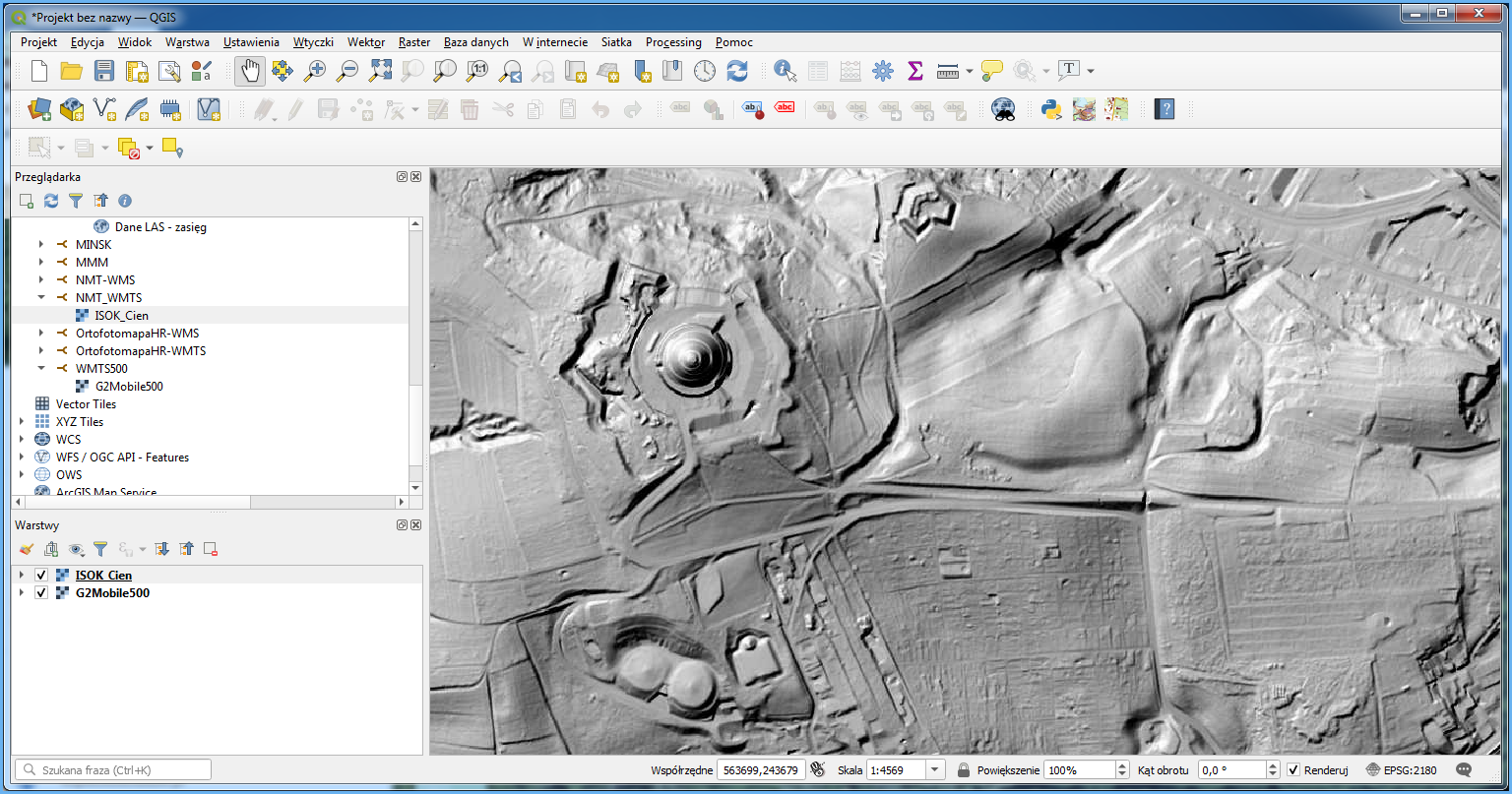 Figure 5. WMTS related to the DEM and connected to QGIS

Because WMTS uses prepared tiles adjusted to the 1:500 scale, at higher magnifications, the image can be blurred. If this is the case, try to use WMS as an alternative because this service uses direct access to original DEM data and generates images based on it. 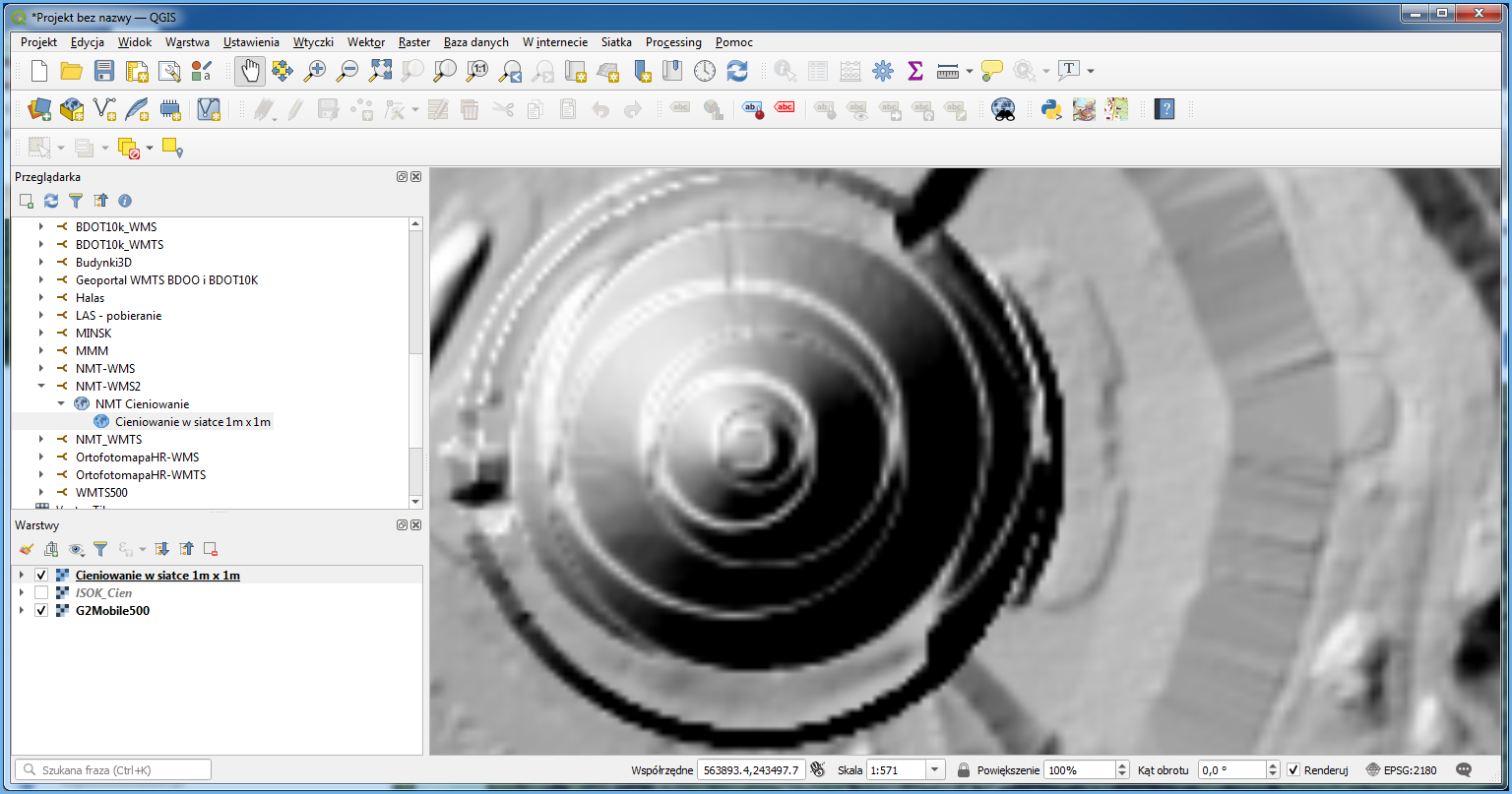 Figure 6. WMS related to the DEM and connected to QGIS

DEM data is provided free of charge and can be used for any purpose. Data can be downloaded from www.geoportal.gov.pl, section "Data for download", layer group "Digital Elevation Model". There are two layers in this group: "NMT-PL-KRON86-NH" and " NMT-PL-EVRF2007-NH". 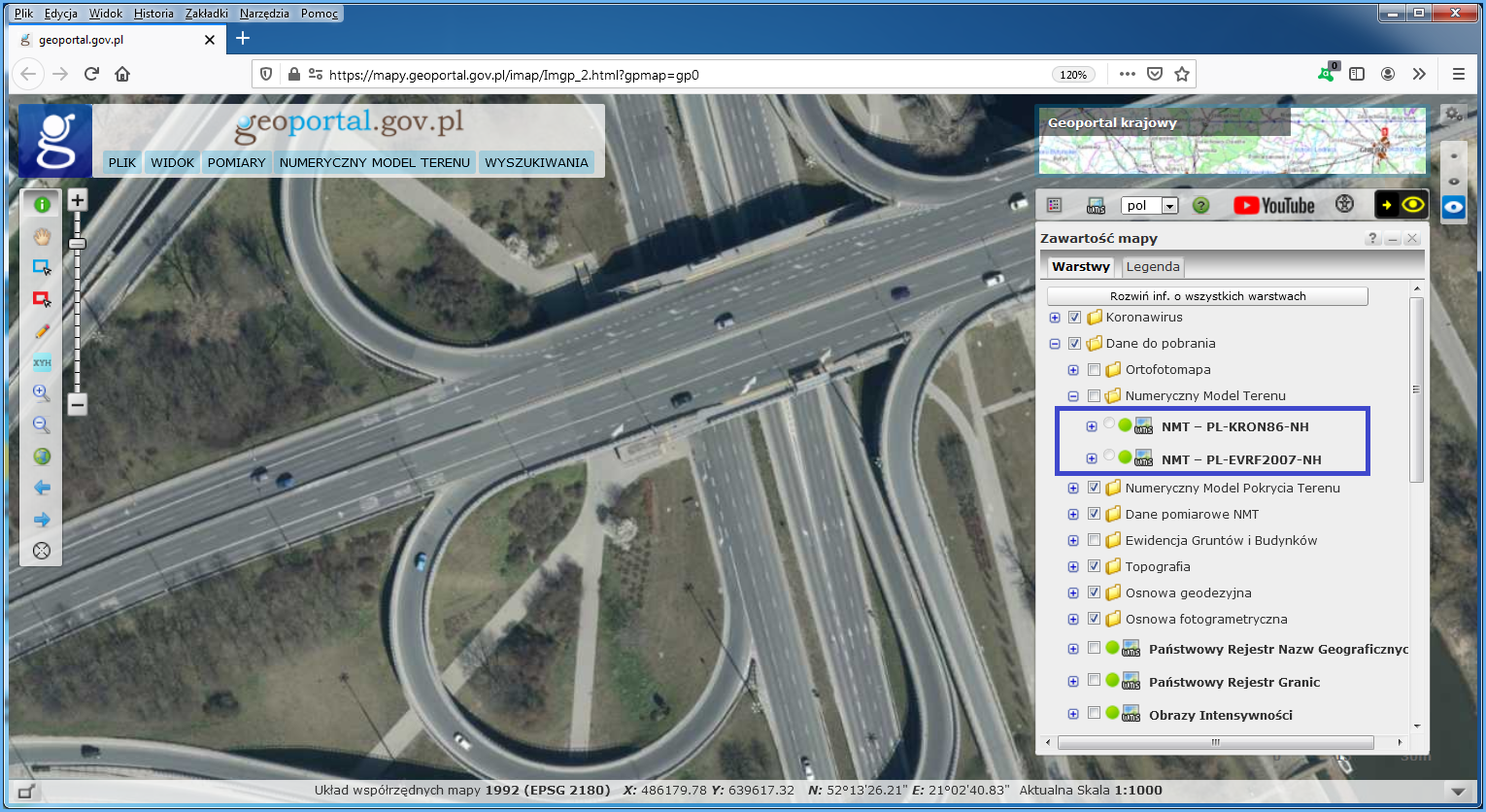 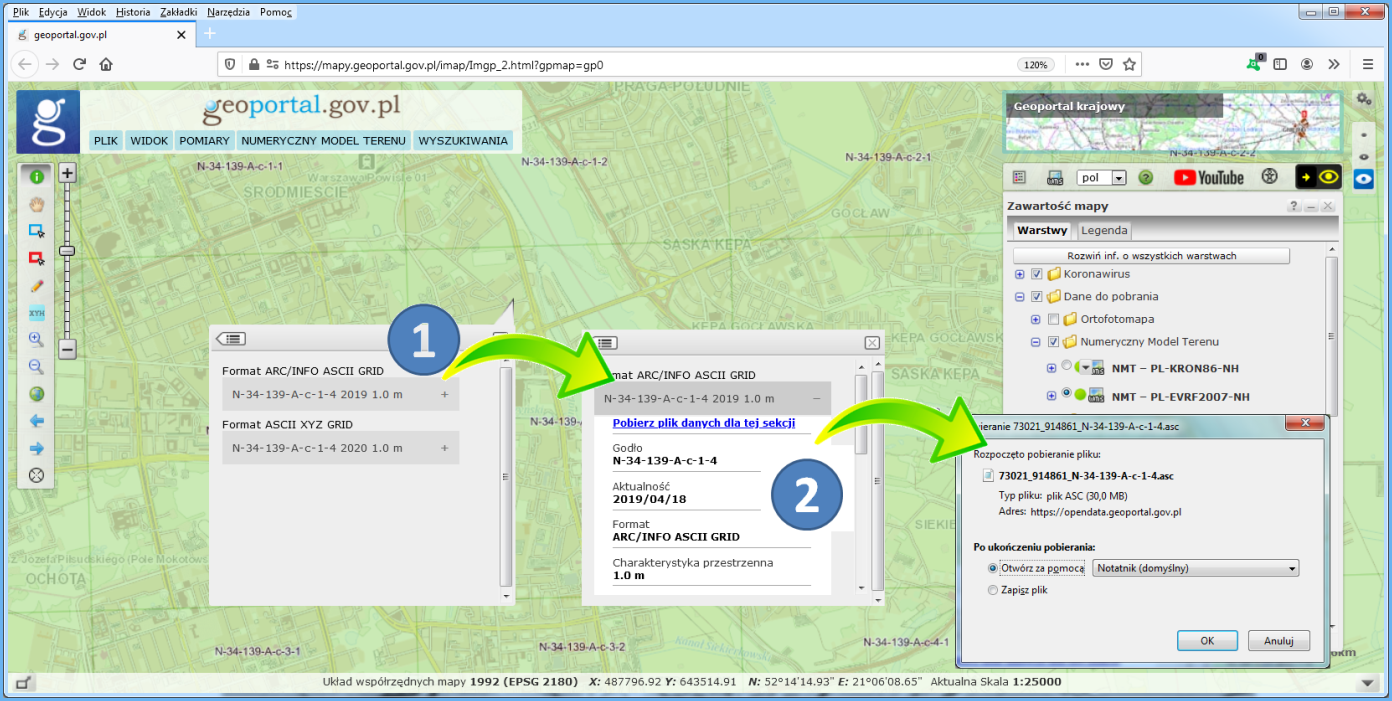 As a result, a file containing DEM data will be downloaded to your computer, and depending on your decision, displayed in the default application, as illustrated in Fig. 9.

DEM data at www.geoportal.gov.pl are downloaded via WMS, depending on the elevation system:

Figure 10. WMS depending on an elevation system

a Specifically, the GetFeatureInfo feature is used for this. It shares a link to download the relevant DEM data file as an attribute in the clicked location. If you connect these services to QGIS or other software, you can use such software to directly download DEM data (Fig. 11). 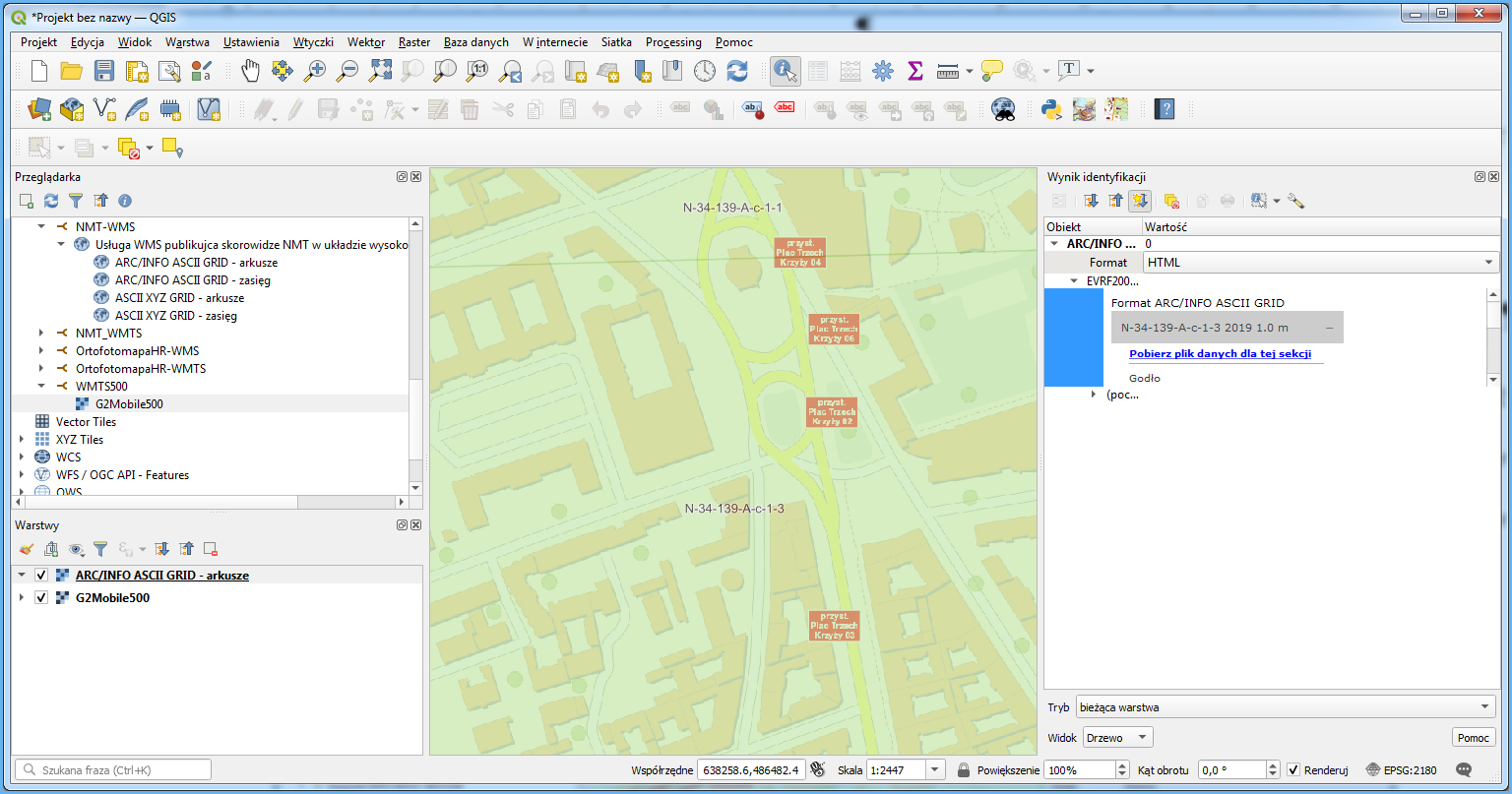 An alternative way to download DEM data is to avail yourself of WFS services (Fig. 12) used to present indexes of the Digital Elevation Model (DEM) available in the National Geodetic and Cartographic Resources. 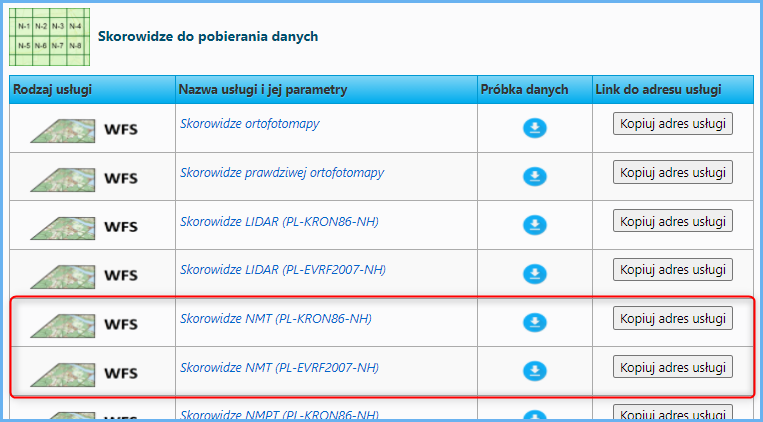 Figure 12. WFS for DEM depending on an elevation system

You can download DEM indexes using any software that supports a WFS client feature, such as QGIS. You can easily download each DEM sheet from the displayed sheet index. This operation is supported by the „Informacja o obiekcie” (About object) tool. When you click the selected sheet, it will display its metadata, including „Link do pobrania” (Link for download) that you can use to download DEM measurement data (Fig. 13). 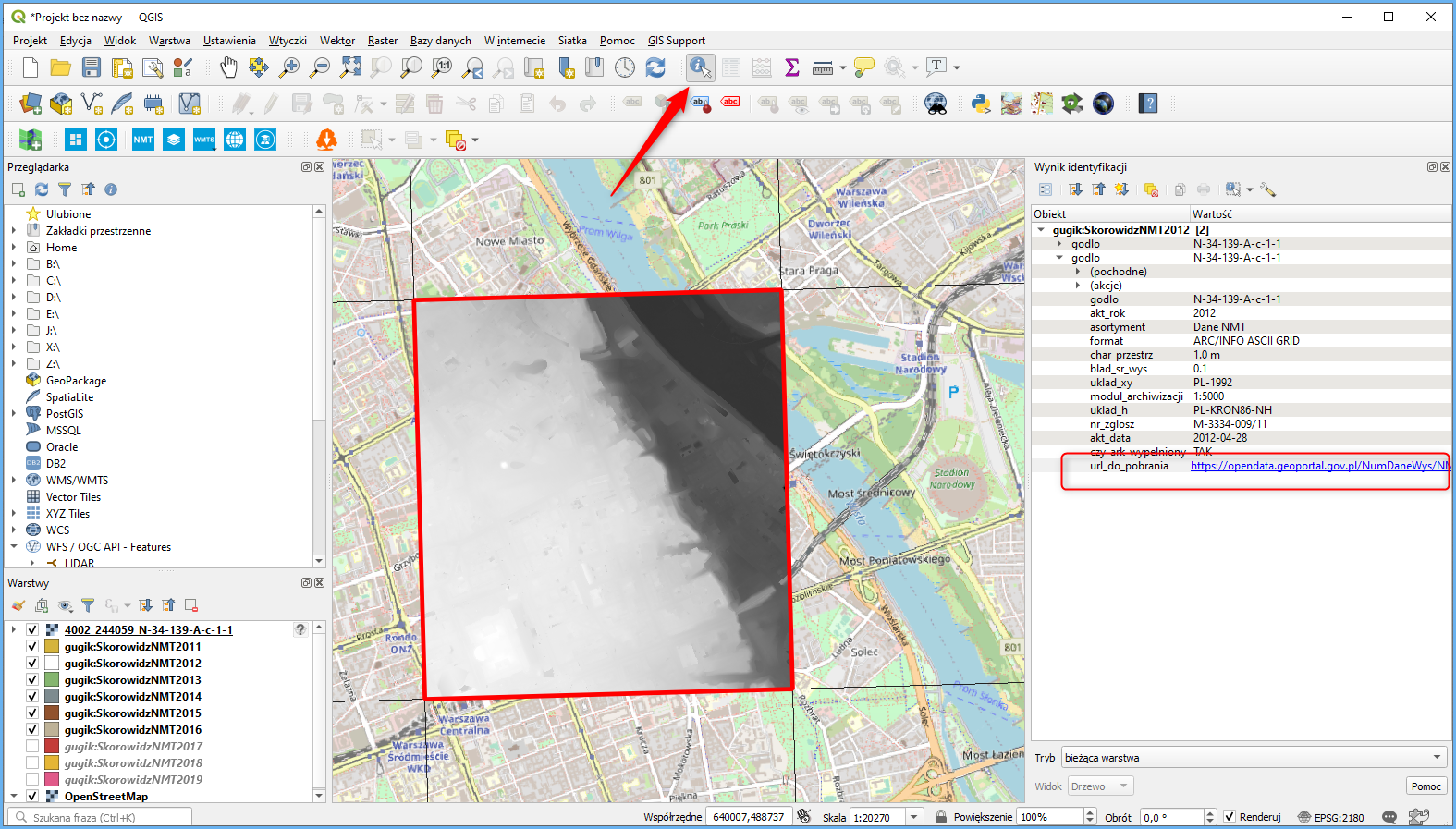 Figure 13. WFS service related to DEM and loaded into QGIS

The service makes it easier to download the DEM for larger areas, and soon similar WFS services will be implemented for other resources.

Another way to download the DEM is to use WCS services whose URLs are published on www.geoportal.gov.pl:

The most convenient way to use WCS services is to connect them to QGIS as a data source, as shown in Fig. 15. 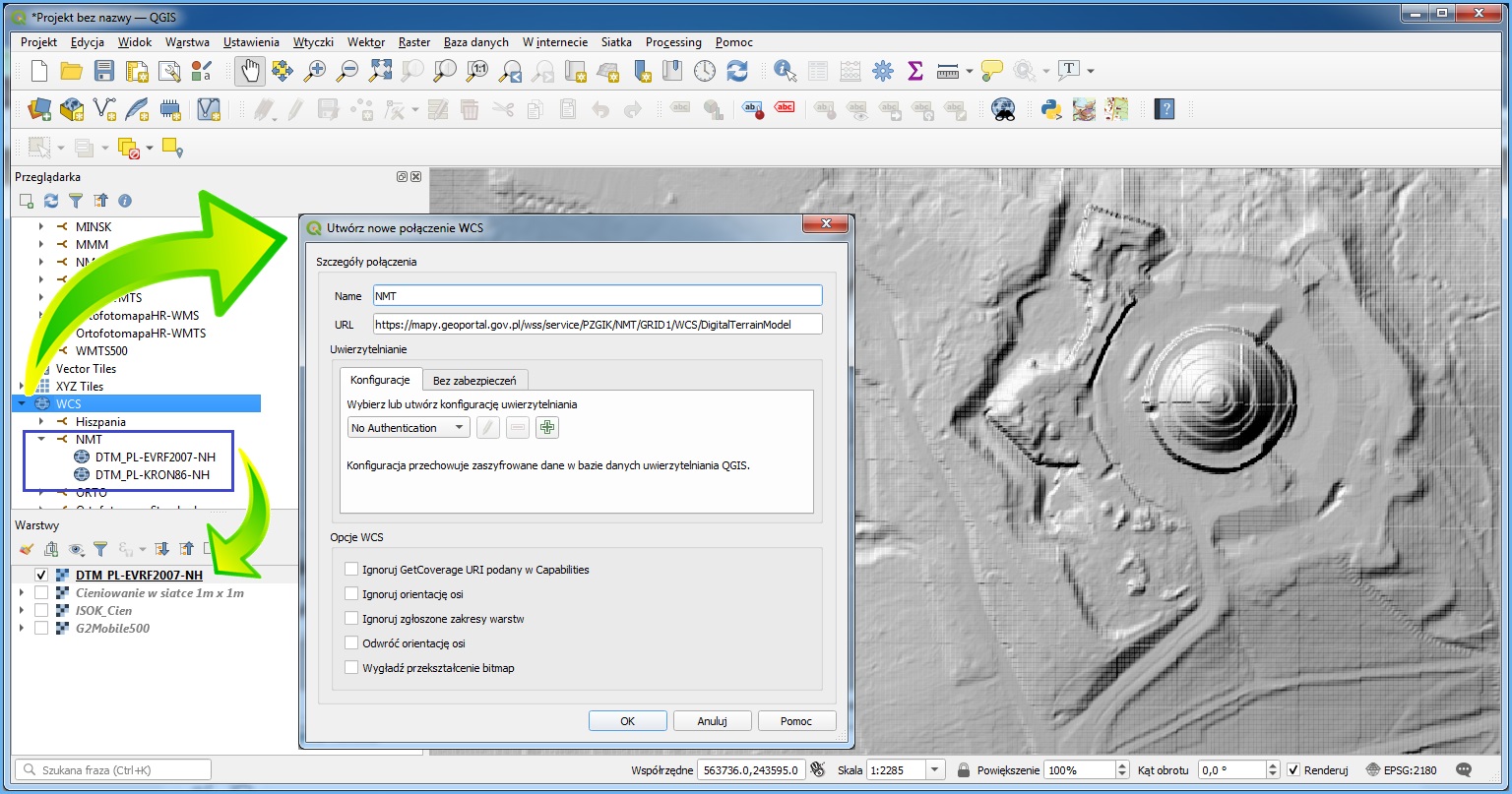 Figure 15. Application of WCS in QGIS

When you create a layer in a QGIS project, the service generates a DEM image for the displayed area per the parameters specified in layer styles. 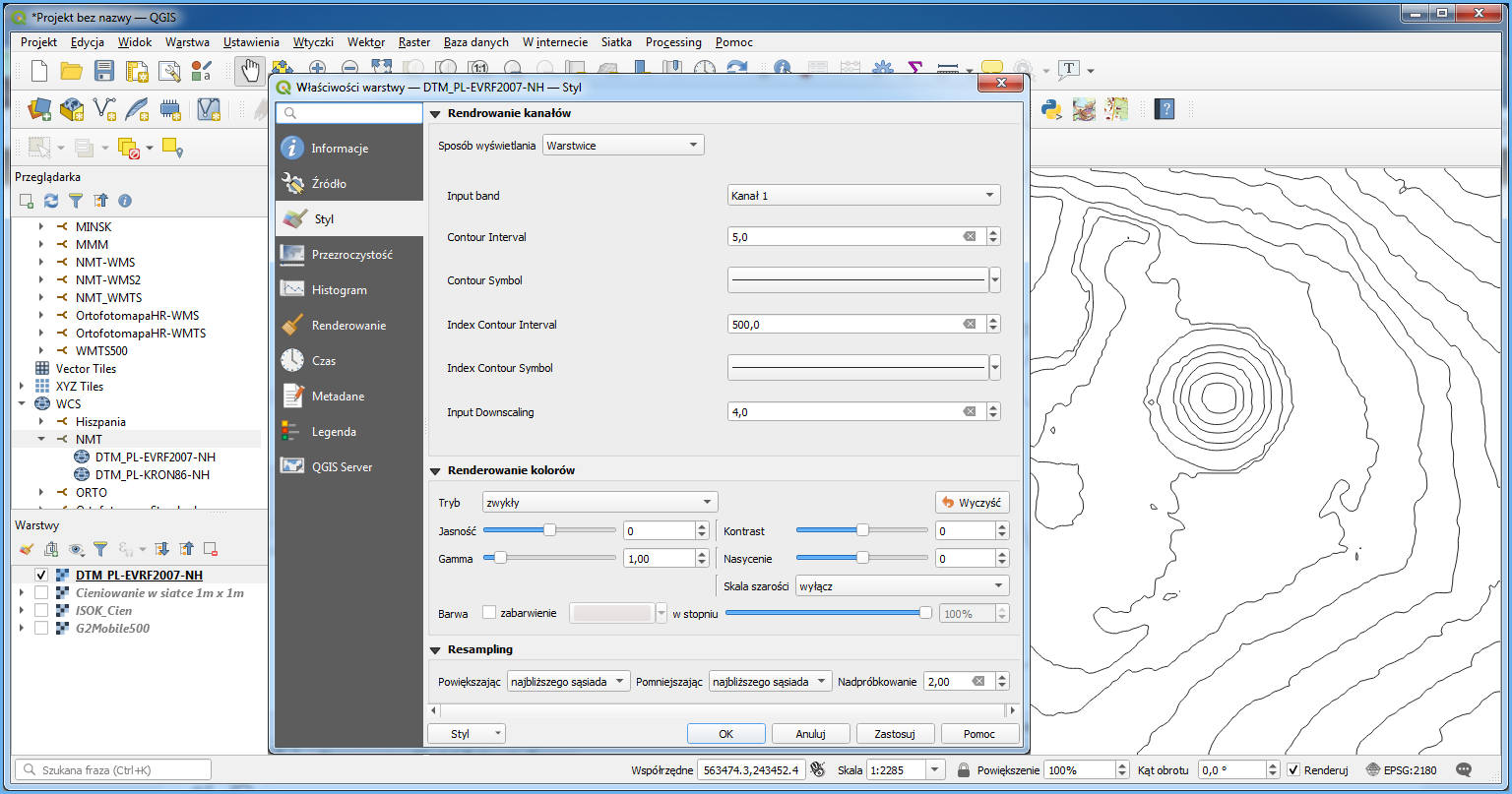 Figure 16. Application of WCS in QGIS with visualized contours

Use the export option illustrated below to save a fragment of the DEM as a file. 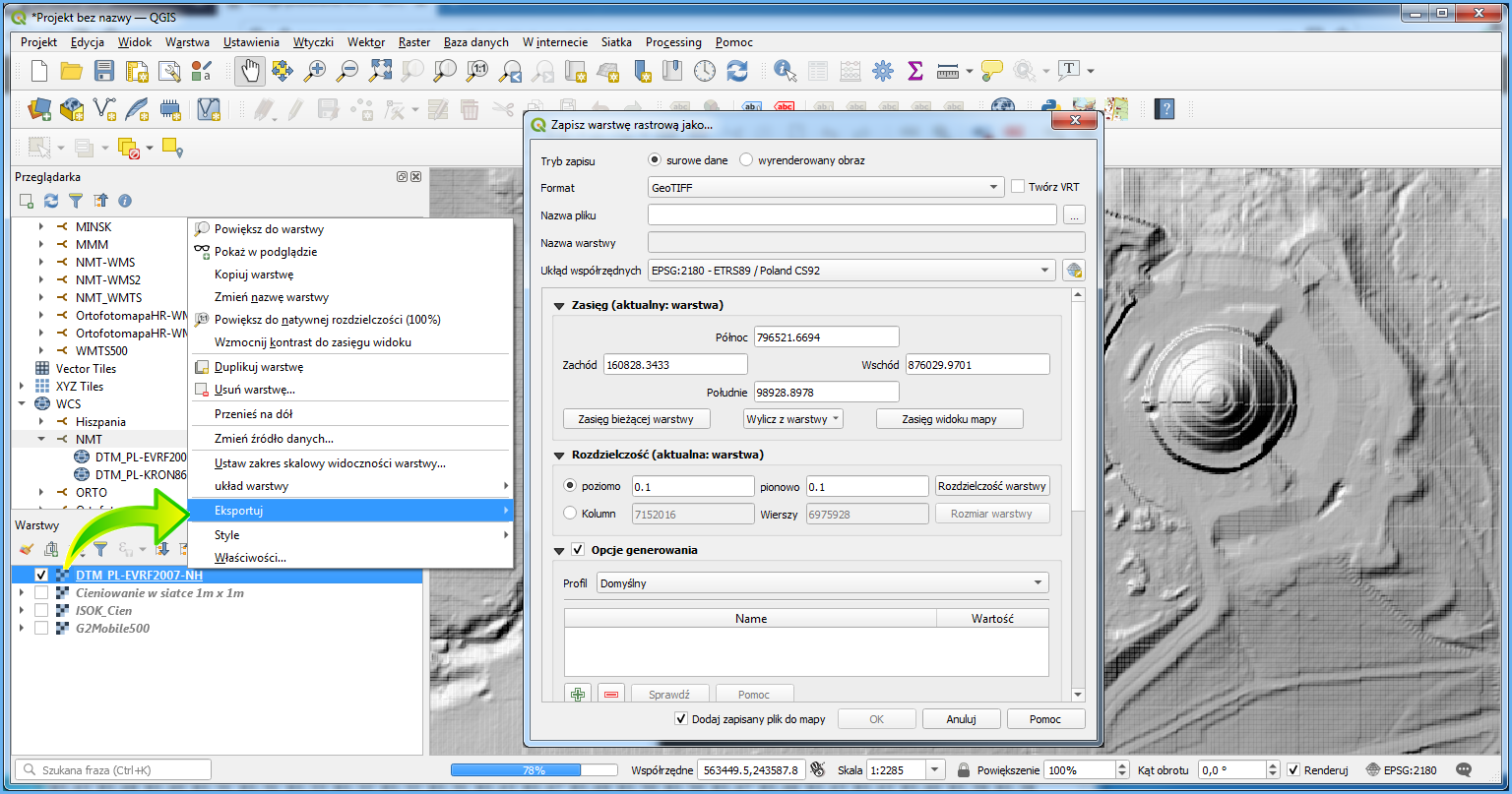 Figure 17. Export of the DEM to a GeoTIFF file

As a result, you get a local file consistent with the settings which represents the respective fragment of DEM raw data or rendered image. For technical reasons, in WCS, the area available for a single download is limited, but the service is suitable for downloading fragments corresponding to around a dozen of original DEM sheets.

DEM can be also downloaded via WCS directly from www.geoportal.gov.pl using the „Pobierz dane z usługi WCS” (Download data from WCS service) tool. You can find this functionality on the toolbar in the left part of the map application user interface, as illustrated below. 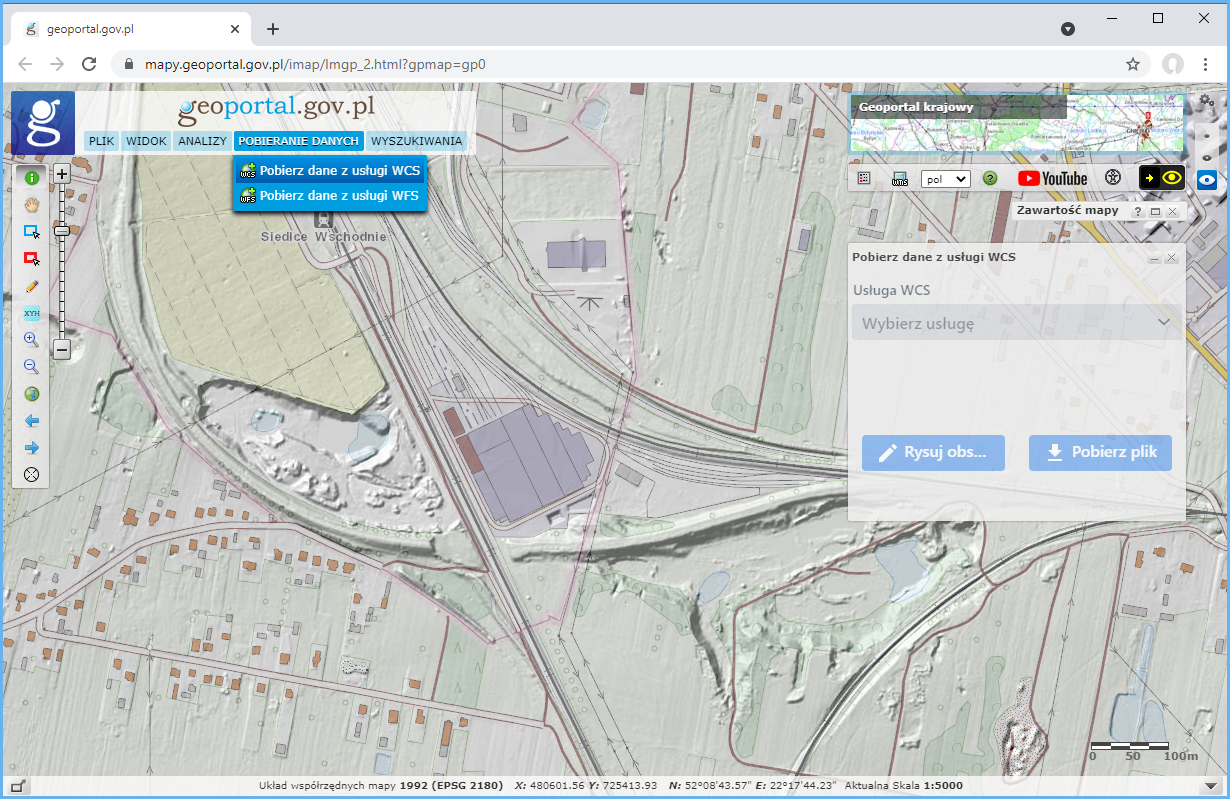 To download data click the tool icon, select the data for download in the displayed pane or select a spatial range on the map (max. 10 km2), as shown in Fig. 19. 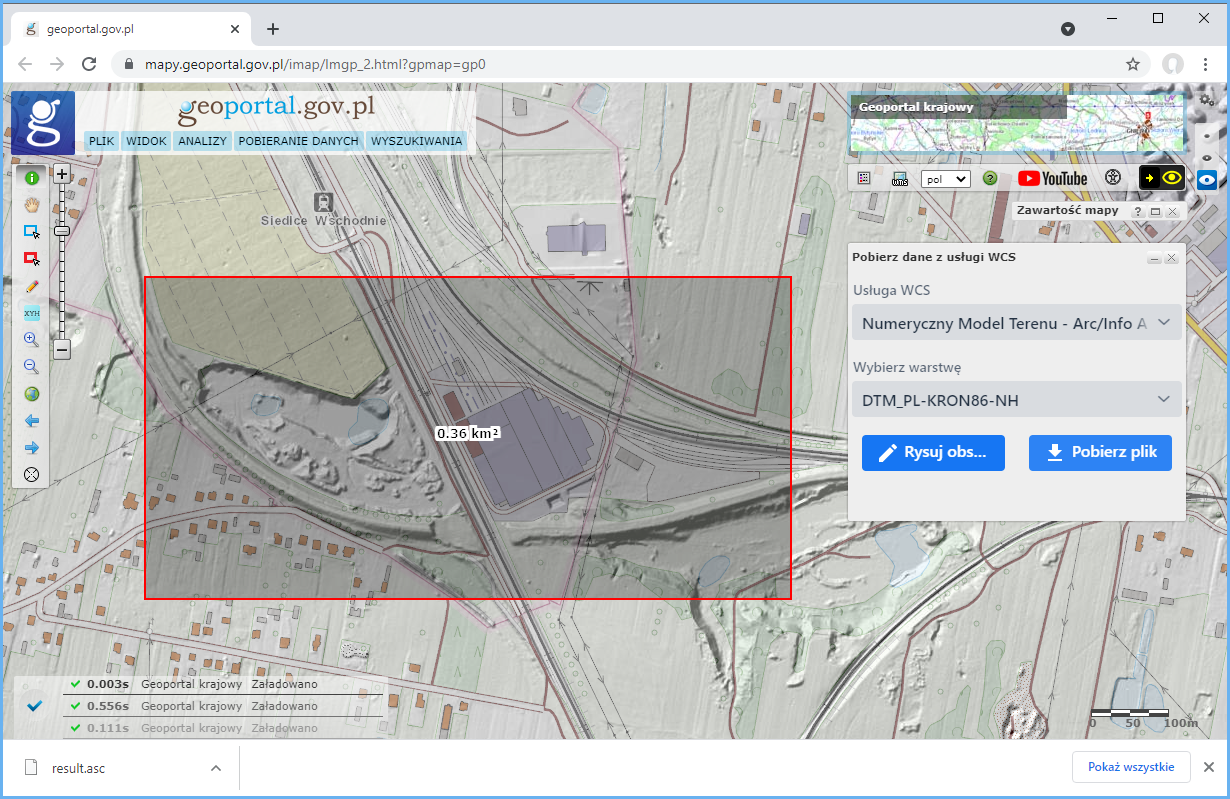 Figure 19. Downloading the DEM via WCS

Afterwards, all you have to do is download the prepared data file: 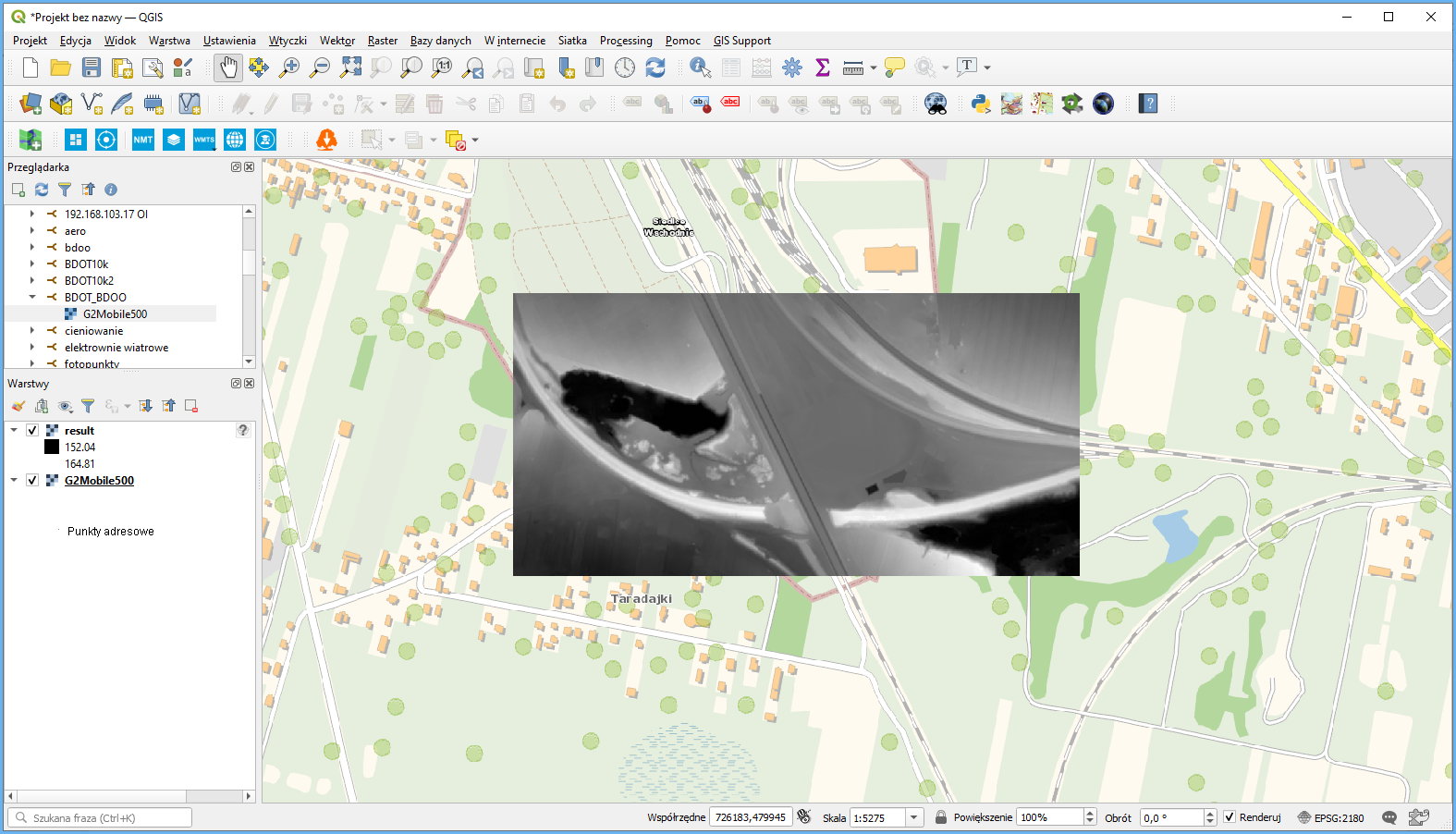 The tool is particularly useful when the area of interest covers e.g. four sheets and, if downloaded in the conventional manner, would yield four sheets that you would have to put together. By using the functionality provided, you can quickly download a ready-made fragment, no matter what the source data sheet arrangement is.